Confident Korea cruises into the semifinal

Confident Korea cruises into the semifinal 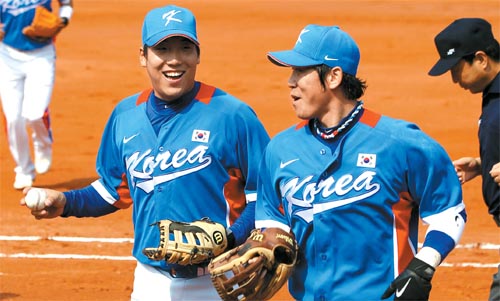 Kim Hyun-soo, left, and Cho Dong-chan were among the key players in Korea’s 17-0 demolition of Pakistan at Aoti Baseball Stadium on Tuesday. [YONHAP]


Korea is confident about extending its perfect record against China at the Guangzhou Asian Games baseball semifinal today and is already looking forward to the gold medal game tomorrow night.

If Korea wins its 1 p.m. game today as is widely expected, it will go onto face the winner of the Taiwan-Japan game in the final.

Korea is one step closer to winning its first Asiad baseball gold since the 2002 Busan Asian Games, having cruised through the group stage by defeating Taiwan, Hong Kong and Pakistan by an aggregate score of 38-1 - with the lone opposing run coming from Taiwan in the opening game. In its final group stage win (17-0) over Pakistan on Tuesday, left fielder Kim Hyun-soo led the team with four hits and four RBI in five at-bats.

Korea is considered the gold medal favorite now and boasts the most potent batting order in the tournament with notable names like Choo Shin-soo, Lee Dae-ho and Kim Tae-kyun punishing opposing pitchers.

“We mostly evaluated our pitchers today in training, but we focused on the possibility of facing Japan or Taiwan as our opponents,” national baseball team manager Cho Beom-hyun told Yonhap News Agency yesterday. “We have next to no scouting reports on China at the moment. We will go with those who are playing well and will tweak our batting order based on whether China uses a left-handed or right-handed pitcher in the game.”

While Korea has never lost to China in baseball, it did face a scare at the 2008 Beijing Summer Games when it managed a razor-thin 1-0 win in 11 innings. In the Asian Games this year, China defeated Thailand and Mongolia by a total score of 22-0, but lost to Japan 3-0.

“We will not take our opponents lightly just because they are projected on paper as weaker teams,” Choo said. “Baseball is a game in which upsets happen all the time. We will try our best to net good results [against China].”

The Japanese squad is made up of amateur players and Nippon Professional Baseball league prospects and is the only other team with a perfect record (3-0) after the group stage. But Taiwan (2-1), which lost its opening game to Korea, 6-1, also has several NPB players and MLB prospects in its lineup, and it figures to be favored slightly over Japan to reach the finals.