Park pulls through with 100-meter win

Park pulls through with 100-meter win 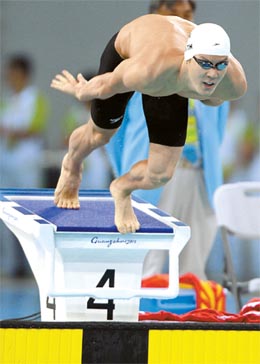 Park Tae-hwan dives into the pool for the 100-meter freestyle final at the Aoti Acquatics Center in Guangzhou, China last night. [YONHAP]

Park Tae-hwan won the first major 100-meter freestyle event of his career, and in the process made a clean sweep of the short- and middle-distance freestyle events at the 2010 Guangzhou Asian Games at the Aoti Acquatics Center last night.

Park faced strong competition from Lu Zhi Wu of China and Takuro Fujii of Japan, but won the gold and set a new Korean record with a strong surge in the final length with a time of 48.70 seconds.

Park was fifth in the eight-man race at the halfway point with a time of 24.02 seconds, trailing Lu, who led the pack. Despite the slow start, Park managed to close the gap with a strong turn and a spurt in the final length of the pool to earn his third gold medal of the Asian Games.

“I didn’t even know I was fifth at the halfway point of the race,” said Park in a post-race interview. “Since I’m not as quick as others in short-distance [races], I focused on going full-throttle from the start.

“It’s not my main event but I trained hard. I’m happy to have won a gold medal with a good time.” 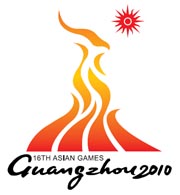 Coming off Asian and Korean record-setting performances in the 200- and 400-meter freestyle races, Park looked in fine form for the 100-meter event. Park anchored the 4x100-meter freestyle relay on Tuesday night and timed in at a personal best 48.53 seconds to help Korea to a bronze. Park’s previous best was 48.94 seconds, a Korean record, at the 2008 Korean National Sports Festival.

Park continued his strong performance by boasting the fastest time in the 100-meter preliminaries yesterday morning at 49.85 seconds. Shi of China finished with the second-fastest time, first in his heat, in 49.91 seconds, while Fujii and Lu Zhi Wu of China both clocked in at 50.27 seconds.

Park has one more individual event remaining - tomorrow’s 1,500-meter freestyle - but having competed in three individual events as well as two relay events already, Park will have to be at his best to outpace Sun Yang and Zhang Lin. Zhang holds the Asian record of 14:45.84.

Park’s Australian coach Michael Ball mentioned after his win in the 400-meter race on Tuesday that he needs to focus on the short-distance events and that he is not suited for the 1,500-meter.

“Coach Ball told me on numerous occasions that I needed to train harder in the 1,500m, considering other swimmers are much stronger in the event,” Park said. “The Asian Games are not over yet. It’s the last competition of the year, and as such, I will give it my all.”

Also last night, Jeong Da-rae added another gold to Korea’s strong showing at the Asiad, winning the women’s 200-meter breaststroke with a time of 2:25.02.