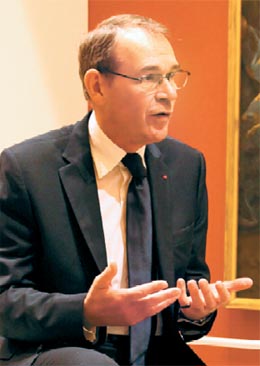 Jean-Jacques Aillagon’s colorful, striped socks contrasted with his dark suit during his press preview to promote Versailles’ art collection that’s on exhibition at the Seoul Arts Center. As president of Chateau de Versailles, Aillagon’s sartorial sense could have been a reflection of the cartoonish sculptures of Japanese pop artist Takashi Murakami that are on display inside the French palace until Dec. 12, contrasting with Versailles’ Baroque and Rococo interiors.

Or perhaps Aillagon’s socks were a reflection of the mindset of Versailles’ president, who has been holding solo shows of such sensational contemporary artists as Murakami and Jeff Koons over the past three years in the palace, despite complaints by some conservatives including a descendant of Louis XIV, who said last month he would seek an injunction against Murakami’s exhibition.

In an interview with the Korea JoongAng Daily following the press preview for the Exposition Speciale du Chateau de Versailles in Seoul, Aillagon remarked, “It is important that the palace, where past histories and old heritages have accumulated, can also serve as a place for new creations of our days.”

He has old and modern art at his fingertips, as he previously served as chairman of the Centre Pompidou in Paris, one of the world’s best-known modern art museums. Aillagon also served as France’s culture minister from 2002 to 2004.

Q. Aren’t you concerned about the argument made by Louis XIV’s descendant that the Murakami show is disrespectful to his ancestor, who set up the palace? 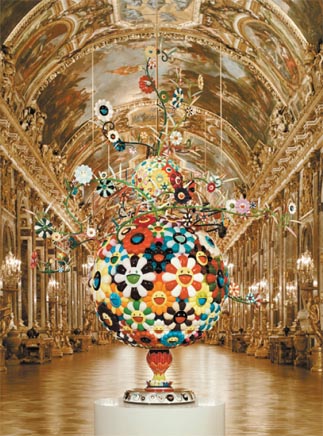 In fact, most French citizens are not interested in their complaints. Media of other countries are more interested in them. When the Murakami show started, some people applied to get permission to picket the exhibition near the palace. We permitted it, as they went through legal procedures, but only 38 people showed up for the demonstration.

What’s the intention of the contemporary art shows?

About 70 percent of visitors to the Chateau de Versailles are foreign tourists. Many French people don’t visit the palace, thinking they could go there anytime. But as the palace is holding the shows of contemporary artists - Koons in 2008, the French artist Xavier Veilhan last year and Murakami now - the number of domestic visitors surged. It shows French people’s desire for new things.

In addition, visitors to the palace tend to be the older generations, regardless of whether they are local or foreign. But the shows of the contemporary artists are helping the palace attract young generations.

Those who have come to view contemporary artworks can also see how they can coexist with old heritages in the palace. The palace can offer a place where old and new art are compared to each other and are harmonized to inspire new creations.

Korean authorities are torn between the preservation of the country’s old palaces and modern uses of them. What is your advice?

It is true that palaces should be carefully preserved so that the future descendants could see the cultural heritage. But they should not be a dead place or a place of the past. A living culture should be in them. Holding high-quality cultural events in the old palaces can be a way of helping them to be a living place.

The Exposition Speciale du Chateau de Versailles is being held at the Seoul Arts Center in southern Seoul until March 6. [YONHAP]


What do you want visitors to the Exposition Speciale du Chateau de Versailles to get from the show?

I hope that the visitors will taste the essence of French Baroque, Rococo and Neoclassical art between the mid-17th century and the late-18th century - the period when France was a leader of European history and culture. The official portrait of “le Roi Soleil [the Sun King]” Louis XIV included in this exhibition is a very important painting at the level of a national treasure.

The viewers also could compare the life and culture of the French royal family with those of Korea’s Joseon Dynasty. They could discover both similarities and differences, and it will give them a chance not just to understand another culture, but also to look back on their own culture.

The exhibition is being held at the Hangaram Art Museum of the Seoul Arts Center until March 6. It features 80 paintings and crafts from Versailles. They include the famous portrait of Louis XIV by Hyacinthe Rigaud and the portrait of Marie Antoinette by Elisabeth Vigee-Lebrun, a rare successful female painter of the time.