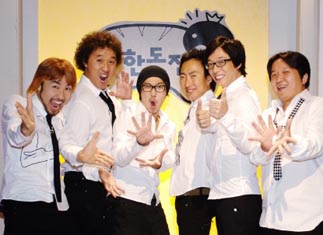 The MBC variety show “Infinite Challenge” has successfully completed yet another project to help the needy.

The cast and crew delivered a 113.7 million won ($99,000) donation to the Green Umbrella Children’s Foundation in an event held at the MBC Dream Center, a satellite studio in Goyang, Gyeonggi, on Nov. 11.

The donation represents a portion of the profit from the sales of a calendar they created for 2010.

Since 2008, the cast and crew of the program has made a calendar every year and donates the proceeds to charity.

This year’s profits are estimated to be approximately 300 million won, according to news sources.

The money given to Green Umbrella, which provides services and support for underprivileged children, will be used to aid children suffering from diseases such as cancer.

Meanwhile, the 2011 calendar will go on sale tomorrow at 10 a.m. on the program’s Web site.