Sea of opportunity, or an ocean of peril

Sea of opportunity, or an ocean of peril 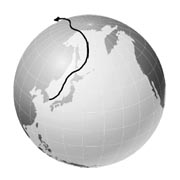 Two freighters belonging to the Beluga Group of Germany came to Ulsan in July last year. A few days later, they left for Europe with a load of construction materials. But then they headed towards Vladivostok before continuing to sail north. Finally, they passed through the Bering Strait and sailed across the Arctic Ocean to arrive in Hamburg, Germany.

It was the first successful commercial journey via the Arctic sea route. Beluga Shipping pioneered the Arctic route after roughly 18 months of preparations. It is said to have been motivated by NASA satellite photos showing that Arctic sea ice has shrunk to a level that allows for the passage of a ship.

Sailing from the North Atlantic to the Pacific via the Arctic Ocean has been a long-cherished dream of the Europeans. But Arctic sea ice obstructed their efforts. Since John Cabot tried to explore the Arctic sea route in 1497, many attempts have failed, and sailors have even lost their lives trying to explore the route.

According to records left by polar explorers, the Arctic sea route is perilous and horrible. “It is extremely cold,” one wrote. “Even the ropes and pulley of the boat were frozen solid. In a snowstorm, a lump of ice as big as a house fell from the polar ice cap and blocked the route.”

A sea route between Europe and Asia was first opened by Portuguese explorers in 1488. They sailed to the Indian Ocean by going around the Cape of Good Hope. It took nearly 400 years before that route was shortened by 6,000 kilometers (3,728 miles) with the opening of the Suez Canal in 1869. The Arctic sea route, which opened 140 years after that, shortens the distance between Europe and Asia by 8,300 kilometers. It is a dream route that will bring about a revolution in marine transportation because it shaves 40 percent off the current time and cost to travel between the regions by sea. The absence of Somali pirates is an additional benefit.

Among the ports in Asia, Busan’s is one of the closest to the Arctic route, and it could soon become a global marine transportation hub, providing new opportunities for the city and Korea’s shipbuilding industry. However, I wonder whether we should welcome this new development unconditionally. The irony of the situation is that the new Arctic route has been opened because of the thinning of sea ice, which was caused by global warming. It is both a blessing and a curse, and we should proceed accordingly.