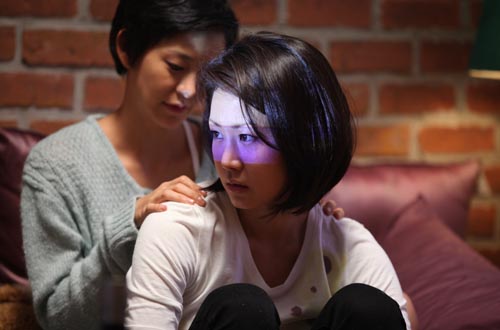 
When So-young, an attractive, successful gynecologist finds out that her husband is having an affair with Su-ji, a 20-something student and yoga instructor, her hatred for the girl quickly turns into an insatiable curiosity.

Instead of taking the more common route of either full-on revenge or denial, So-young befriends the naive girl and extracts details about her husband’s affair in a frighteningly cunning manner. In turn, Su-ji, who has become mentally fragile due to the weight of the affair, begins to depend on the older, seemingly wiser So-young.

In “Love, In Between,” a remake of the Finnish film “Black Ice” (2007), director Jeong Yoon-su weaves a tangled web of a psychological menage a trois. As the three main characters walk a thin line between romantic passion and platonic compassion, the film reminds the audience that sexuality involves the mind more than the body, and that seduction always trumps blatant sex. In this sense, the ultimate question in the illicit affair becomes, who wants what - not who is doing what.

What makes this rather common story about adultery special is So-young’s mental shift - from feeling impassioned hatred and anger towards Su-ji, to ultimately sympathizing with her situation. If So-young’s deceptive friendship with Su-ji was just for revenge, the film would have lost its emotional intrigue. However, as So-young jumps back and forth from jealousy to empathy to acceptance in dealing with Su-ji, we are invited to ask questions about the meaning of marriage and convention, and whether we are all susceptible to becoming victims of the arbitrary nature of any romantic relationship.

The love triangle is also made richer for the fact that So-young and her husband, Ji-suk, seem to be in love with each other. Ji-suk doesn’t deny that he loves So-young when Su-ji asks the question.

The movie stays fair to both women, taking the time to contemplate each of their love for this one man. Su-ji’s determination and naive passion in being clear about what she wants gives her a powerful eroticism. Meanwhile, So-young’s uncertainty towards her marriage provokes fear in her indecisive husband, who becomes more drawn to her as she starts to distance herself from him.

The well-orchestrated story becomes a bit disappointing towards the latter part of the movie, in which a dramatic end feels too abrupt, almost like a cop out. But the movie succeeds in tossing out important questions about marriage and sexuality for today’s audiences, who live in a society in which expression has become freer and convention weaker.