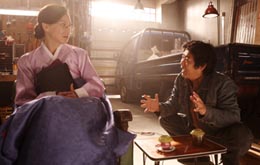 Director Lee Hae-young is back with a steamy story that explores sexual desire and sexual orientation with a touch of humor.

This is the second time the director has made a film about sexuality, but this film is stronger and spicier than his pervious one. Lee made his debut with the 2006 film “Like a Virgin,” the story of a teenage boy who competes in ssireum (Korean traditional wrestling) to make money for a sex change operation. The film garnered Lee four best director awards in 2006 and 2007.

Festival tells the stories of four different couples who live in the same neighborhood. They are all fairly ordinary people, with rather mundane occupations ranging from a cop to a high school teacher, but as the film progresses we discover their sex lives are anything but ordinary.

And the more wild their fantasies, the more hilarious the scenes.

The film has earned rave reviews from critics, who have called it the best sex comedy since the 2002 hit “Sex is Zero.”

The movie stars seven of the top actors and actresses in the nation, including Shin Ha-kyun, Ryu Seung-beom and Uhm Ji-won.

There was a time when the “Saw” franchise was original, if still very disturbing.

But that all ended after the first movie, and now the Saw brand is on its last legs.

“Saw 3-D” is the seventh - and supposedly final - iteration of this gory, trap-humans-in-inescapable-situations film series, and if you’ve seen the last six, you’ve probably seen this one too.

The only difference this time around is that dismembered limbs and free-flowing blood are now available for you in three-dimensions.

If you’ve never seen a Saw film before, the premise is pretty simple.

The Jigsaw (Tobin Bell) - a clever murderer who’s intent on giving normal people lessons in morality by putting them in morbidly life-threatening situations - locks a number of people in a room or house and makes them solve puzzles, slice each other up with sharp objects or try to escape from his unnecessarily gruesome traps.

There’s no use mentioning much about the characters because more than half of them will die before the 60-minute mark.

So if you really enjoy watching poorly developed characters die in terrible ways, then Saw 3-D is probably the best movie this year. 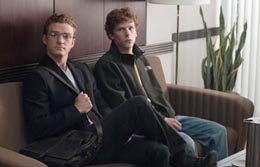 It’s hard to think that Facebook is not even seven years old.

In less than a decade, the social network has become an integral part of people’s everyday online routine, giving rise to new verbs (“friending,” “poking,” “unfriending”), helping users remember their friends’ birthdays and pushing the boundaries of privacy in the new Information Age.

The tale of how it all came to be is the subject explored in “The Social Network.” Directed by David Fincher and written by the uber-talented Aaron Sorkin (“The West Wing”), the film portrays Facebook founder Mark Zuckerberg (Jesse Eisenberg) as an ambitious, socially inept Harvard student in a 21st century morality tale.

The fictionalized account of Facebook’s origins, based on the book “The Accidental Billionaires” by Ben Mezrich, has drawn some controversy for its depictions of Zuckerberg, et al.

But the sharp dialogue and complex portrait of the gaggle of precocious college students combine to create a poignant film that has been widely praised as one of the year’s best.

“Let Me In” takes its premise from a Swedish vampire film called “Let the Right One In.” In this American remake, a young boy strikes up a relationship with a vampire girl who, for obvious reasons, can only come out at night.

It’s part horror, part fantasy and part youthful friendship, as the boy and girl learn to like each other despite her tendency to want to, you know, suck people’s blood.

There’s a man - a caretaker of sorts - who kills people and feeds the red stuff to the girl. And the people of the town they moved into are frightened by the sudden and numerous murders that have struck in such a normal place.

Directed by Matt Reeves, this film received mainly positive reviews, despite being a remake of a horror classic.