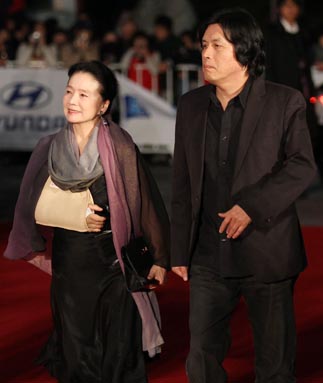 Actress Yun Jung-hee and director Lee Chang-dong arrive at the Daejong Film Awards at the Grand Peace Palace in Hoegi-dong, northern Seoul, on Oct. 29. The awards are the longest-running and most prestigious in the nation but continue to be plagued by scandal. By Yang Gwang-sam

In the Korean film industry calendar, October and November are the busiest months for award ceremonies. The Daejong Film Awards, the longest-running of the bunch, were held late last month, and the Korea Film Awards, which is relatively new to the scene, marked its eighth year with a ceremony yesterday. Next Friday, the curtain will go up on the 31st Blue Dragon Film Awards, the second most prestigious.

But despite the profusion of awards ceremonies, no single event has gained legitimacy as the definitive Korean ceremony in the way that the Academy Awards represent the U.S. film industry or the Cesars represent France.

The Korean film industry has experienced remarkable growth in quality and quantity over the years and numerous directors and actors have won awards at major international festivals and awards ceremonies, but Korean awards ceremonies just haven’t caught up.

“It’s true,” said culture critic Jeong Deok-hyun. “We do not have an authoritative film award that can represent this nation. Maybe it’s the lack of transparency and absence of a fair nomination system. Instead, many [organizations] grant awards based on their interests.”

The situation has gotten so serious that, according to news sources, a high-ranking official at the Ministry of Culture, Sports and Tourism said in September that the ministry has considered cutting off funding to the Daejong Awards if the awards continue to be mired in scandal.

Reports like this prompted the Daejong Awards, held on Oct. 29, to change its nomination process this year. Instead of juries composed only of industry representatives chosen by the executive committee, as in past years, it invited 50 members of the general public to sit on the jury, which then submits its recommendations to the organizing committee.

But experts doubt that the Daejong Awards can repair its tarnished image.

“Past scandals have dealt a huge blow [to the Daejong Awards],” said one director who wished to remain anonymous. “Unless the members of the executive committee are replaced, it will be the same forever.”

Even though the jury now includes the general public and the organizing committee membership has changed over the years, the executive committee has not changed its composition since its inception.

Established in 1958 by the Ministry of Culture and Education, the predecessor to the current Culture Ministry, the Daejong Awards have been dogged by scandal throughout its history.

In the most recent incident, singer-actress Jang Na-ra was nominated for Best Actress even though her film, “Sky and Ocean,” was not released prior to the awards. Meanwhile, Ha Ji-won was left off the list, even though her film, “Haeundae,” drew rave reviews, had more than 10 million individual viewers and was the fifth highest grossing film in Korean history.

In 2004, the nominations of veteran actors Kong Hyung-jin and Kim Rae-won for Best New Actor stirred controversy. In 2002, the prosecutor’s office found that two entertainment agencies bribed the Daejong Film Awards jury to get their celebrity clients nominated.

“Henequen” (1997) swept the Daejong Film Awards in 1996, earning both Best Director and Best Film honors, but the movie was still in final editing when it won the awards.

Apart from the Daejong Film Awards, experts say it would be hard for the other awards to represent Korea, given their affiliations. The Korea Film Awards are sponsored by Munhwa Broadcasting Corporation and the Blue Dragon Awards are organized by the daily sports newspaper Sports Chosun.

“We need an independent group that selects the winners, and that group should not be affected by any other interest group,” Jeong said.