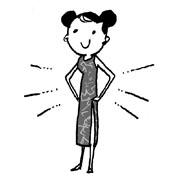 It is known that Korea, China and Japan have a long history of familial yet discordant relations, but the reason is perhaps less apparent. The three countries’ customs are similar in many ways, but each also has distinctive characteristics of their own. But what does this tell us about their relationship? Let’s look first at the differences between them.

Each region has climatic differences that may have given rise to distinctions in its customs. In an area like China, where a cold, dry wind blows constantly, people need energy to survive and oily matter to protect the skin. In the old days, the Chinese did not wash because there was no skin lotion to protect their skin from the wind. Japan has a damp climate and water-born diseases broke out frequently, so the Japanese had to bathe frequently. In fact, the custom of using a damp towel at restaurants arose to protect against water-born diseases. Korea has four distinct seasons and people harmonize with nature with a drink.

The gardens of the three countries are different, too. The Zhuozheng Yuan, or Humble Administrator’s Garden, in Shanghai, China, is characterized by beautiful landscaping, which features Taihushi stones from Taihu in Suzhou and old pine trees from Mount Huangshan in Anhui Province. Japanese gardens emphasize symbolism, with rocks and pebbles on the ground to represent the Earth and the universe. The art of the bonsai, or potted plants, which are created by pruning and twisting young branches, is a pursuit of beauty. Perhaps it tries to harmonize happiness and pain. Korean gardens, meanwhile, lead you to nature. A pavilion is built to give people a space from which to contemplate nature and become part of it.

There are also differences in the traditional garments of the three countries, which are particularly pronounced in women’s clothing. The Japanese kimono represents the “aesthetics of hiding,” as it covers bare skin. Its special feature is the obi, a large sash that fastens in the rear and emphasizes a woman’s derriere. The hanbok, or Korean traditional dress, emphasizes the aesthetics of line. The curve of the skirt gracefully rises up to contrast with the sharp straight line of the white collar. The Chinese qipao was worn by Manchu women. The stylish, tight-fitting modern qipao vividly reveals a woman’s shape.

The three countries may be different, but it is the way they complement one another that could bring harmony to the region.