RDA ready to lend a global hand for any task

RDA ready to lend a global hand for any task 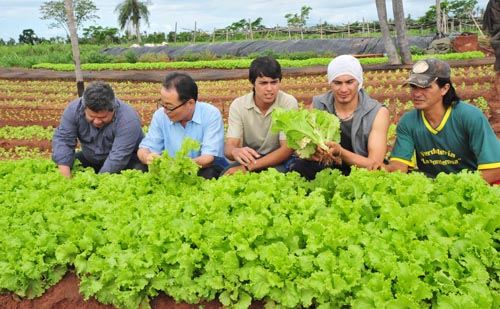 
In December 2009, the Korean Project for International Agriculture (Kopia) Center in Kenya demonstrated a pedal-driven thresher to Kenyans.

Although made with simple technology - a bicycle pedal attached to a manual thresher - it sped up the threshing process several times. The event that drew hundreds of spectators, including the Kenyan vice president, was covered by the Kenyan media with titles such as “Korea to help Kenya boost food security,” according to the Rural Development Administration (RDA), which set up the center.

“The agricultural needs in developing countries are so huge that we find we can help in any area,” said Na Seung-yeol, director general of the technical cooperation bureau of the RDA.

Na said the RDA hopes not just to help, but to help big. The state-run agency’s goal, he said, is to become the largest mentor in agriculture technology for developing countries in Asia.

The RDA multilateral conference body with Asian countries - called the Asian Food and Agriculture Cooperation Initiative - launched 14 projects to help 12 member countries in April. Next year, the RDA plans to add four more memberships and come up with even bigger projects for them.

Its African equivalent, the Korea-Africa Food and Agriculture Cooperation Initiative, is also growing. The RDA launched the initiative in July with 17 African countries and is planning to have the first summit early next year to push for various projects.

It could be good planning, but some cast doubt over whether the RDA can give substantial help to developing countries. The budget the RDA earmarked for international agricultural cooperation this year was 9.1 billion won ($7.9 million). It has requested 13 billion won for next year.

The budget, which included money for projects with advanced countries, is smaller than the budgets at other government agencies.

The Korea International Cooperation Agency, for instance, spends 25 billion won to 30 billion won annually, or 6 percent to 7 percent of its total annual budget, on the international agricultural cooperation.

The Agriculture Ministry, which oversees the RDA, also started its own agricultural cooperation program recently and earmarked a 10 billion won budget for only helping developing countries for next year.

It is small internationally as well. The Bill & Melinda Gates Foundation announced a plan last year to contribute $540 million to $1 billion over the next four years to help developing countries in the agricultural sector.

Chung Il-byung, 57, head of the Kopia center in Kenya, said Korea’s efforts in Africa are still at a nascent level compared with its biggest neighbors, such as China and Japan. “We lag far behind what some other countries are doing here,” Chung said. “The budget should be supplemented to make an impact.”

Na, at the RDA, said the budget is insufficient. He said the agency will work hard to secure more funds. Still, he said, the RDA will do its best to do what it can in a cost-effective way.

“More than 1 billion people are suffering with a daily income of less than $1,” said Na. “What it takes to help them is creativity, not just money, and we are ready to do that.”