2 teams in K-League set to clash in rematch

2 teams in K-League set to clash in rematch 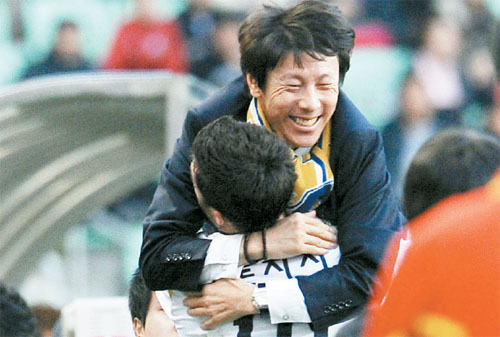 Having recently captured the AFC Champions League title, Seongnam has set its sights on winning the domestic K-League title and is eagerly waiting for a shot at redemption against the defending champions, Jeonbuk.

Seongnam won its first round match against Ulsan Hyundai, 3-1, on Sunday night to face Jeonbuk in the second round. Seongnam, which finished the regular season with a record of 13 wins, nine draws and six losses will face a tough challenge because it is the fifth and lowest-seeded squad in the tourney.

The second round game is a rematch of last year’s championship title series. Having finished fourth overall in the regular season standings, then-rookie manager Shin Tae-yong led his Seongnam squad to victories over Incheon United, the Chunnam Dragons and the 2009 AFC Champions League winners Pohang Steelers before losing to the top-ranked Jeonbuk team on an aggregate score of 3-1.

“I still remember last year’s finals in which we lost to Jeonbuk,” said Shin. “It will be important to avenge our loss from last year but it’s more important to win through fair play.

“Coming off a two-week rest, Jeonbuk looked a bit rusty in its first-round win, but they boast plenty of seasoned veterans on their roster and they’ll be ready for us. If we prepare thoroughly, there’s no way we can lose the game.”

Jeonbuk will also have a chip on their shoulder entering the game. The Motors finished the 2009 regular season with a league-best record of 17 wins, six draws and five losses and went on to win the playoffs.

The defending champions are the third seed in the playoffs this year after posting a 15-6-7 record in the regular season and will have to beat Seongnam before it can earn a shot at Jeju United and FC Seoul in the semifinals and finals.

“As expected, we had a tough first-round match, [a 2-0 win against Gyeongnam FC],” said Jeonbuk manager Choi Kang-hee. “Our opponents were well prepared and we were rusty.

“We’ll be ready for the second round. Seongnam is playing well of late and their attack has been sharp with Choi Sung-kuk in the lineup.”