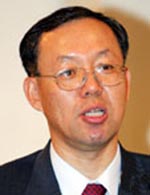 Moon Ha-yong will chair an international antipiracy body until March.

A Korean diplomat was selected on Nov. 10 in New York to lead an international effort to combat rising piracy.

Moon Ha-yong, ambassador for the International Counter Terrorism Cooperation for Overseas Koreans and Consular Affairs, was selected to be chairman of the Contact Group on Piracy off the Coast of Somalia (CGPCS) at its headquarters in New York.

The CGPCS, launched in January 2009 under a United Nations antipiracy resolution, is a multilateral effort to fight piracy.

According to the Ministry of Foreign Affairs and Trade, the number of crimes committed by pirates off the coast of Somalia rose from just 10 in 2004 to 111 in 2008.

As of Nov. 4, 438 seafarers and passengers and 20 ships were being held for ransom by pirates, according to the International Maritime Organization.

“Amid increasing complaints over Somali pirates, I will work hard to come up with ways to crack down on pirates in more efficient ways,” Moon told the Korea JoongAng Daily. “I will work to coordinate more international cooperation on this issue.”

The CGPCS consists of 50 countries and 10 international organizations.

Korea is the seventh chair country and will lead the group until Turkey takes over after the next plenary session in March next year.

After being selected chair at the seventh plenary session, Moon suggested creating a Web site for its antipiracy efforts. The site would be used to exchange information on piracy and share ways to counter it.

At the last plenary session, an agreement was reached to provide more support to countries in the thick of the piracy war, such as Yemen and Kenya. CGPCS members are also considering conducting legal procedures in those countries instead of Somalia, whose political situation is unstable.

“Considering South Korea’s situation [in which it concentrates its military sources] against North Korea, the additional dispatch of a warship is not easy, but South Korea will consider another way of contributing to the antipiracy efforts,” Moon said.