Walking your way to a lower golf score

Walking your way to a lower golf score 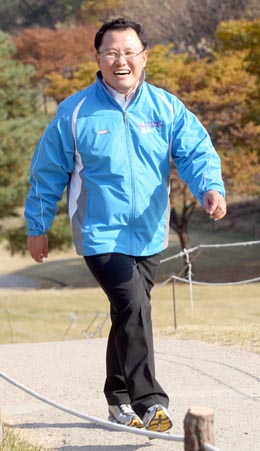 If it were up to Sung Gi-hong, Korea’s golf courses would be walking-only.

Sung is head of the Korea Sports Promotion Foundation’s sports industry division, which is building six “eco-friendly” public golf courses that will be free of caddies and motorized golf carts.

Not only is walking the healthiest form of exercise, Sung says, it improves overall happiness and could even shave a few strokes off scorecards.

Sung is famous for promoting walking as a form of exercise and thinks golf courses are a natural place to stay on your feet, rather than behind the wheel.

“When you walk on the golf course, you can walk a total of 7 kilometers [4.3 miles],” said Sung. “Why turn away from this perfect opportunity to walk?”

As an example of what golf should be like, Sung points to Scottish courses, where motorized carts are a rare sight. They are mostly reserved for the elderly or the sick. In fact, many golf courses there do not have golf carts at all because they think people who are not able to walk on their own should not play golf.

Walking is the essence of golf in Scotland, Sung says. Golf courses routinely give penalty strokes when golfers, caddies and even managers are found to be riding in motorized carts.

But Korean golf is a different story. Here, golf carts are inseparable from the country’s courses. Most clubhouses charge an average of 50,000 won ($45) for a cart and caddie.

Sung was first introduced to walking as a form of exercise early in his career when he was interviewing Hangul scholar Han Gab-su, who is considered one of the pioneers of the sport in this country.

Walking as a form of exercise was virtually unheard of in Korea in those days. Tennis and jogging had been the most popular sports among young people his age, but Sung wanted to do something a little different.

So he started researching walking. He ended up writing theses and books on the subject and even earned his doctorate by studying walking.

Sung found it difficult to convince people that walking was one of the best forms of exercise there was. Nobody wanted to hear it, he said.

Sung persisted, continuing to spread the benefits of walking.

He now believes walking is a well known and widespread sport here.

“I read a paper by Seoul National University’s Sport Science Institution that said the average insurance cost dropped 2 percent after walking gained popularity, and I was proud to be part of the influence,” Sung said.

Sung believes walking-only golf courses are the next step. “Walking while playing golf is better exercise than walking in other places.”

According to Sung, the body reacts better to walking when it is part of a leisure activity, rather than a strenuous work out. When the body perceives labor, metabolism decreases.

Scientists also say the color green generates serotonin in the brain - another benefit to playing golf.

Sung even argues that walking will lower golf scores. “When you walk, your brain gets sharper and you can concentrate better,” he said.

Thousands of accidents occur on motorized golf carts annually, but Sung says there are no accidents when it comes to walking.