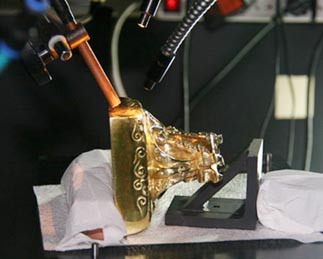 Cracks on the third state seal were fixed with laser welding. [YONHAP]

The Korea Institute of Machinery and Materials said yesterday that it has restored the third state seal of Korea, which will be used until a new seal - the fifth - is created.

The fourth state seal was created in 2007 after the third seal developed cracks on its surface.

The government, though, decided not to use the fourth seal after Min Hong-gyu, chief of the government’s state seal management team, was accused of pocketing 900 grams of gold left over from making the fourth seal. Min also was accused of using a modern method of production instead of the traditional Korean method, authorities say. Min now faces a trial on fraud charges.

The state seal, a phoenix-shaped stamp, is used when the president approves important state affairs.

Officials said the government will use the third state seal for six to 12 months until the fifth seal is finished.

Experts managed Thursday to fix cracks on the third seal, which had been kept in the National Archives of Korea since 2008. It was first used in 1999.