In archery, nerve-wracking win by Koreans

In archery, nerve-wracking win by Koreans 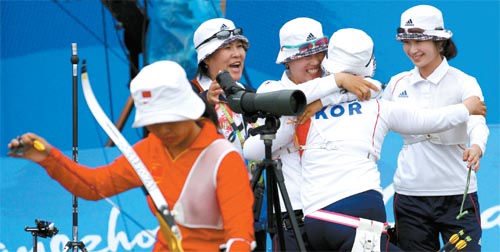 
The Korean women’s archery team needed two rounds of nerve-wracking tiebreaker shoot-offs to down the home team China and earn its fourth consecutive Asiad gold at the Aoti Archery Range in Guangzhou, China yesterday. The gold is Korea’s seventh since in the event since it was introduced at the 1978 Bangkok Asian Games.

Korea’s Joo Hyun-jung, Ki Bo-bae and Yun Ok-hee and the Chinese squad of Cheng Ming, Zhang Yunlu and Zhu Shanshan competed in a tightly contested battle with the two sides exchanging leads after each end. At the end of the third end, the Chinese trio seemed to have the momentum on their side as they nursed a three-point (168-165) lead. Korea managed to outscore its opponents 55-52 in the final end to push the match into a shoot-off.

In the shoot-off rounds, each member of the squad is awarded a single shot. Korea and China were deadlocked at 28 points apiece after the first shoot-off to force another round. With the gold medal on the line, all three Korean archers calmly hit the center of the target to combine for a perfect 30 points. Cheng followed up the effort with a 10 of her own but the pressure of having to hit the center of the target seemed to be too much for her teammate as Zhang managed a seven on the next shot. The match ended with Korea outscoring its opponent 30-27 in the second shoot-off.

“I didn’t know it would be this difficult to anchor the team,” said Yun in an interview with the JoongAng Ilbo. “We faced many situations in which the match came down to the final shot. I tried not to get nervous and that was very difficult.”

In the earlier rounds, Korea placed first in the qualifiers to earn a bye into the quarterfinals along with China and Taiwan. Korea easily defeated their first opponent Mongolia, 227-191, in the quarterfinals. The semifinals proved to be a tougher round as Korea narrowly edged India 29-26 in the shoot-off portion after playing to a 221-221 tie after four ends. All final-round matches ended in exciting fashion as China also played Taiwan to an exciting 220-219 win in the other semifinal and India defeated Taiwan, 218-217, in the bronze medal match.

Ki and Yun compete in the women’s individual quarterfinals events tomorrow at noon.

In the men’s individual qualifiers over the weekend, Kim Woo-jin, 18, set a world record of 1387 combined total points. Kim, along with Oh Jin-hyek, will compete in the elimination matches starting Wednesday at 10:30 a.m. The men’s team competes in the quarterfinals against Qatar at 10 a.m. today with the finals taking place at 4:42 p.m.