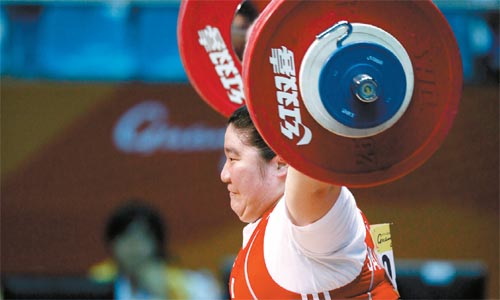 Weight lifter Jang Mi-ran competes at the Asian Games on Friday. Jang overcame a nagging back injury to win her first Asiad gold in the women’s over 75-kilogram weight class. [REUTERS/YONHAP]


Jang Mi-ran overcame a nagging back injury and completed the year on a high note by winning her first Asiad gold in Guangzhou, China, on Friday.

Coming off a disappointing third-place finish at the 2010 World Weightlifting Championships in Turkey because of her injury, Jang successfully held off her Chinese rival Meng Suping to win the women’s over 75-kilogram (165 pounds) weight division to place first with 130 in the snatch competition 181 in the clean and jerk portion of the competition for a total of 311 kilograms.

The 21-year-old Meng, who had edged Jang to place second at the recent World Championships, finished a close second with 135 in snatch and 176 in clean and jerk for a total of 311 kilograms - her lower clean and jerk score broke the overall tie. Maria Grabovetskaya of Kazakhstan placed third with 290 kilograms total.

Jang had been the most dominant competitor in the women’s heaviest weight division in weight lifting over the past few years. She won her first World Championships in 2005 in Doha, Qatar, and won four consecutive world titles and a gold medal at the 2008 Beijing Olympics.

Despite her dominance on the international stage, she had come up short twice at the Asiad, placing second in Busan in 2002 and again inDoha in 2006.

Jang had never placed lower than second in a major competition and the 2010 World Championships were supposed to serve as preparation for the Asiad. But when Jang’s winning streak at the international level came to an end and news of her back injury surfaced, many grew concerned over her chances in Guangzhou.

“To be honest, I had to deal with a lot of pain and was not at my peak condition,” Jang said at a press conference on Friday. “I couldn’t even prepare properly for the event and had to hold back tears after winning the event. I didn’t really feel the pain in the immediate moments leading up to the event due to the adrenaline rush, but I now feel sore all over.”

The World Weightlifting Championships are held on an annual basis except for the year in which the Summer Olympics are held. Park will be looking to regain her world title in Paris next year, but she ultimately has her sights set on winning her second consecutive gold medal at the 2012 London Olympics.

“I was able to pull through this year despite not being at 100 percent,” said Jang. “It will serve as a huge confidence boost as I begin to prepare for the 2012 games. In that sense, my gold medal here was huge.”

Jang will have plenty of competition with the young Meng developing into a world class weight lifter and with Tatiana Kashrina of Russia lifting a world record 145 kilograms in the snatch portion at the 2010 World Championships for a combined total of 315 kilograms to win the gold.