The man with the magic touch

The man with the magic touch 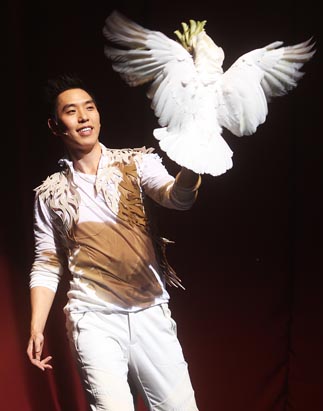 Lee Eun-kyul does a magic trick with his parrot Gaji at a press rehearsal on Nov. 9.

Lee Eun-gyeol leads a magical life - literally. At 29, he is Korea’s youngest professional magician and he has already built a solid reputation for himself in Korea and abroad.

Three years ago, he was pulled away from his budding career to serve his two years of mandatory military service, and when he finished he took a trip to Africa, an experience he says changed his outlook on magic and life.

Now, he is back with a new set of goals and a new magic show called “The Illusion.”

In an interview with the Korea JoongAng Daily last Friday, Lee said that his show is not only about magic but is an illusion meant to inspire creativity in all who watch it.


Q. Tell me more about your show. I hear it’s divided into two parts.

A. Yes, the first part contains the kind of mesmerizing magic tricks that people expect to see in a magic show. But the second part is more about magic created by the imagination. In the first part, we use equipment that is not part of daily life, most of which was made especially for the show. We don’t use much equipment in the second part, but most of it can easily be found anywhere. It’s mostly my body and light. The first part contains the magical elements that audiences want to see, but in the second part I try to show the audience that magic can be limitless. 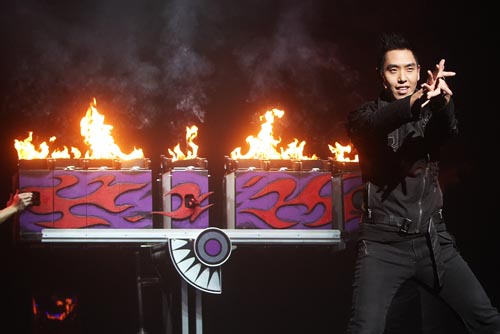 Lee performs another trick with fire in his new show “The Illusion,” which runs through Dec. 4. [YONHAP]


What is the second part of the show like?

This part of the show is called “African Dream.” It’s not exactly magic, but it is still a magic show. I’m trying to show people who are familiar with stereotypical magic shows that these types of skillful magic tricks can also be engaging. I’ve tried to incorporate that element into every show I’ve done for the past years, but this is the first time I’ve actually divided the show into two parts. It’s hard to constantly develop new ideas, but I feel pressured to do better. And I think I’m much more creative when I feel that tension.

You provide narration before the second part of the show. Why is that?

People are still not familiar with shadow plays or mime, so I wanted to explain why I’m doing it. As the segment develops, I’m going to reduce the narration and show more in the performance. In that sense, I look up to Seo Tae-ji. He started by giving the public what it wanted and then drew them into his style of music. Some have said that makes him old school, but I disagree. Whenever he holds a concert, it is always first in sales on any ticket Web site.

I heard that you went to Africa after you completed your military service. What was your experience like?

I have been to many different places around the world, but it has mostly been to perform. I never had a chance to just enjoy the city I was in until this 15-day trip to Africa. That was more than enough time for me to soak in the beauty of nature. I used that time to find the real me.

You are quite a showman. Are you outgoing in real life as well?

Not really. I was shy and quiet when I was young. When I was in my last year in middle school, my parents registered me in a magic class so that I could interact with more people. When I started doing magic for people, they began to see who I am. That’s why became so enthralled with magic. Magic helped me find my true self, but now it’s my turn to find the true meaning of magic.

How has your magic developed over the years?

I started working with cards and birds because people told me that those were the basics. Then when I was 20 I started working at a comedy club in Seoul. It was small and there weren’t many regular customers, so I was able to practice the same skills over and over while also keeping track of the audience’s reaction.

You must have had many memorable incidents while you were working there. What was one of your most memorable?

One day, a Japanese man suggested that I enter a magic contest in Japan so I did it. While I was preparing for the competition (in the comedy club), I didn’t leave the club for about two months straight. Since the club was in the basement, I couldn’t really tell what time of day it was. It threw my biological clock off completely. Whenever I was out of energy, that was the time to sleep and whenever I was hungry, that was the time to eat.

But it was worth it because I ended up winning first place. Then I started to enter competitions in South Africa, Las Vegas, and I ended up becoming a world champion at the 100th anniversary competition of the Society of American Magicians.

When did you start doing the large-scale magic tricks for which you are famous?

After I started earning recognition in and outside of Korea, I asked people about the tricks that other magicians do that Korean magicians don’t. Their response was large-scale magic tricks. So I started to pursue that.

Soon after you started becoming famous, you had to do your mandatory military service. How did that experience affect your career as a magician?

Before I went into the service, I realized that I had invested a lot of time in putting myself out there but not as much on learning new things. So right before I left for the service, I went to see magic shows in Las Vegas. I realized that the shows were the same ones I’d seen countless times - there is no awe factor there. So while I was in the military I tried to come up with something different. Those ideas are now part of the new show.

Are you satisfied with the show?

I’m about 60 percent satisfied. For most people, once you are satisfied with your work, then you just stay at that level. But that’s not true for me. I guess I have a higher standard for satisfaction than most people.

I don’t know when I’ll be completely satisfied, but it’s not going to happen just because time passes. I think that’s what I’m supposed to push for from now on. I’m going to keep developing the segments and later on I want to have a regular performance at a small theater. That’s my goal for now.

Before you go, I have been wanting to ask you about your trademark spiky hairstyle. Why have you stuck to it for almost a decade?

It’s not my choice. People instantly recognize me because of my hairstyle. The reason I decided to get this hairstyle was because I thought my face was too ordinary and there was nothing particularly eye-catching about it. So I thought that I would create my own character with a striking hairstyle.

But I’ve been changing it little by little. Can’t you tell?