Japanese broadcasters have a thing for Korea

Japanese broadcasters have a thing for Korea 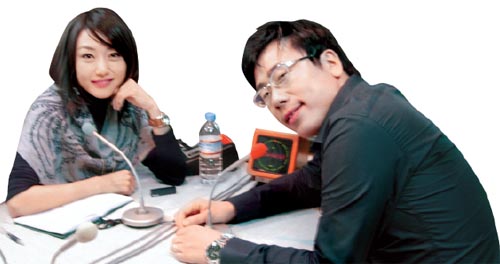 
Flip through the passport books of Masayuki Furuya and Saki Yagi and you should be able to count 389 total Korean entry stamps.

It might even be OK to call these two Japanese citizens Seoulites for how often they travel to Seoul - Furuya visits about three times a month and Yagi makes the trip at least once a month on average.

But it’s all kind of necessary for Furuya, 36, a Korean pop-music broadcaster in Japan, and Yagi, a 32-year-old announcer at Mainichi Broadcasting System Inc. in Osaka, because in addition to their interest in all things Korean, the two host radio and television programs that introduce Korea to Japanese audiences and are working together on an Internet Korean conversation program called “Korean is Pretty Good.”

Last year, Furuya became the first Japanese person to receive a commendation from the Korean government for promoting Seoul in Japan, while Yagi earned the Best Foreign Journalist for Seoul Tourism award at the Seoul Tourism Awards 2008.

They recently co-published a guidebook for Seoul titled “Maniac Seoul: Furuya and Yagi’s Walk across the City,” which came out on Nov. 10. The book covers several half-day walking trips around Seoul and makes sure every nook and cranny of the city is mentioned.

“We show the real aspects of Seoul that the Japanese have not yet discovered,” Furuya and Yagi said in a Nov. 15 e-mail interview with the JoongAng Ilbo.


Q. When did you first visit Seoul?

A. Furuya (Fu): I came to Seoul in 1998 to attend the (Korean Language and Culture Center) at Korea University. Upon arrival, I fell in love with Korean music, so I went to every club in front of Hongik University. Last year, I successfully tied the knot with Korean indie pop singer Heo Min.

Yagi (Ya): I had lived in Seoul for three years when I was in elementary school because my father worked in Seoul. In 2001, I started working at MBS and hosted a radio program for five years called “I Like Korea.” Since then, I have been hosting Korea-related programs.

What made you fall in love with Korea?

Fu: I once got lost on the street because of my poor Korean. Then, a slew of people came to give a hand, asking “Where are you trying to go?” Some people even took me to my destination. People are warm-hearted here, which cannot be easily found in Japan.

Ya: Every time I visit Seoul, it is refreshing and different. I come to Seoul every season to buy clothes and accessories that come at a good bargain compared to Japan.

At Dongdaemun Market, you can order tailored accessories based on your own tastes. I can feel the warm hearts of the people, too.

From a tourist perspective, what should be improved in Seoul?

Fu: It is inconvenient to walk around Seoul because there are a lot of underground walkways. Also, universal design should be implemented in the urban setting to reflect the needs of the handicapped. In addition, when it comes to urban development, it is crucial to think about what to leave and what to take away. It seems like the original diversity and dynamic traits of Seoul are disappearing.

Ya: Unlike the transportation system in Japan, which keeps a regular schedule, it can be confusing in Seoul. I was also perplexed when I first heard about an extra charge for taxis after midnight. Many foreigners with poor Korean skills might see it as a rip-off.

Are there any interesting anecdotes from your travels in Seoul?

Fu: When I first took a bus in Seoul, one ajumma (the Korean name generally applied to older married women) tried to carry my bag for me. I was so embarrassed.

Then, one lady next to me explained in English that Koreans who are seated generally tend to want to help out and hold the heavy bags of those who are standing.

Ya: When I went to Myeong-dong, I was shocked by seeing people walk around in every direction. Japanese inherently keep walking on either the left or right.

What is the latest trendy tour for Japanese visitors?

Fu: It had been mainly about restaurants, shopping and cosmetics until now. However, thanks to the effects of dramas and movies, many Japanese come to experience the Korean lifestyle. They want to experience homestays or go to mountain climbing on Mount Bukhan or Mount Gwanak.