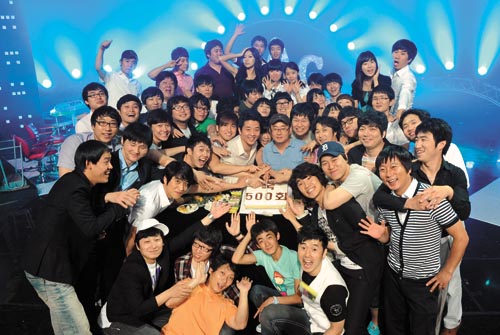 
In the last decade, the sketch comedy show Gag Concert has made a clear impression on Korean viewers, with its memorable catch phrases entering watercooler conversations or small talk between family and friends. Now in its sixth season, the show has paved the way for other sketch comedy shows such as “People Looking for a Laugh” on SBS and MBC’s “Ha ddang sa.”

Although the other programs have since gone off the air, Gag Concert, which started in September 1999 on KBS, remains the longest-running sketch comedy show on Korean television. Its blend of timely subject matter and sharp humor has kept its ratings high, but as the show enters its 11th year, it is losing one of its veteran producers, Kim Seok-hyun, who recently announced he would leave to pursue other projects.

Through the show, Kim has tried not only to entertain, but also to deliver a larger message about the society in which we live. He has also worked hard to legitimize the work of his fellow comedians, which he said he will continue to do even after he leaves.

“I will show that stand-up comedy is not merely a precursor to variety programs,” Kim said. “I want to prove that it is a solid genre of its own.”

Kim joined Gag Concert in 2000 as an assistant producer. He became one of its head producers when comedians Shim Hyeon-seob and Kang Seong-beom left the show in 2004. The two comedians were key members of the cast and their departure dealt a huge blow to the show.

But Kim helped turn the show around and it began earning viewer ratings of 30 percent. 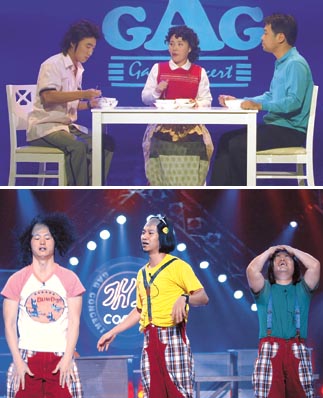 Still shots from sketches on Gag Concert. Provided by KBS

He created the show’s current format, in which programming decisions are based on audience reception. If the studio audience responds negatively, or not at all, to a sketch, the sketch will either be changed before appearing again or it will simply be cut.

“It’s a big mistake to think that just because people laugh in rehearsal, it will be funny on-air,” Kim said. “You need to be able to see what has to be cut and what has to be kept in during the editing process, while still keeping the natural flow of the sketch.

“That’s why I feel that some of the other variety programs are going in the wrong direction. You can’t just put celebrities in random situations and expect something funny to happen and you can’t make something funny with editing and subtitles.”

It is a format that has kept the show innovative. An online poll conducted by the network in September 2009 about the 50 most memorable Gag Concert sketches found that 47 of sketches on the list had been created when Kim was in charge.

Right now, one of the most popular sketches on Gag Concert is “Dal-in,” or “Master.” The sketch pokes fun at a supposed “master” of some task or ability who is not actually any good at it.

Another popular sketch is “Superstar KBS,” which is a parody of “Superstar K,” the singing competition on local cable network Mnet. It is centered around the audition process and the possible comedic situations that can arise therein.

Each hour-long episode has about 10 segments covering different subjects like society and politics. And each seems to have a message. But Kim said there are rules for how that message is delivered.

“You can’t lecture people like a teacher,” he said. “It’s only funny when you say everything the viewer wants you to say in a silly situation.”

Despite its popularity, however, not everyone appreciates the show’s point of view. A recent sketch that poked fun at Korea for being a society that only values people who get to the top drew criticism from Han Seon-kyo of the ruling Grand National Party, who objected to it because it made fun of society.

“Although the sketch was eventually taken off the air, I left it on for five more weeks just because I didn’t want to hear that I had taken it down because of outside pressure.,” Kim said.

For better or worse, Kim has always gotten his message across. But now the comedic master says it is time for him to shift gears.

“When I saw that the age of the studio audience had risen compared to a couple years ago, I started to wonder if it was because I was no longer able to reach the younger generation,” Kim said. “And I realized that it was time for me to leave.”

Kim’s next project is the quiz show “1 vs. 100.” He added that he is also thinking of soon creating a new variety show with comedians from Gag Concert.

We asked Kim to name who he thinks is the best in the business and he pointed to Kim Byung-wook, the director of the hit SBS sitcom “Soonpoong Clinic,” and MBC’s “Highkick.”

“It is important to set a certain pace in your comedy when you want people to laugh,” Kim said. “I can see from his shows that Kim Byung-wook knows how to set up a scene for a laugh.”

In a separate interview, the two Kims sat down together to talk about their work

The sitcom director said he thinks his colleague should try his hand at sitcoms as well.

True to his comedic nature, Kim said in response, “I don’t want to be in second place, so I’ll wait until you retire.”