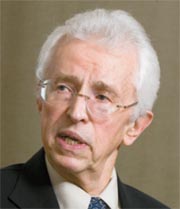 During a recent visit to North Korea, a U.S. nuclear scientist was shown a new facility used to enrich uranium, raising prospects that Pyongyang may be preparing to build a more powerful type of atomic bomb.

An interview with the scientist - Siegfried S. Hecker, the former director of the Los Alamos National Laboratory and currently a professor at Stanford University - was published yesterday by The New York Times.

In reaction, the Obama administration sent its special representative for North Korea policy, Stephen Bosworth, to South Korea yesterday for talks with his South Korean counterpart.

Hecker told The Times that he had been “stunned” by how modern and sophisticated the plant was, and that he saw “hundreds and hundreds” of newly installed centrifuges.

The equipment was in a building that had previously housed an aging fuel center and was operated from “an ultramodern control room,” Hecker was quoted as saying.

North Korea told Hecker that there were 2,000 centrifuges installed and running. The location of the facility is yet unknown.

Separation of isotopes in uranium is needed in order to produce fuel for nuclear weapons, which is what uranium enrichment achieves.

Gas centrifuges are the preferred equipment for uranium enrichment because of their low energy consumption and easy maintenance.

The centrifuges force denser atoms of the gas to the outside, while leaving less dense atoms near the center, eventually enriching uranium to produce fissile material, according to the Institute for Science and International Security.

Centrifuge rotors spin at the speed of sound and require sophisticated metallurgy and design. Because of the detailed work that is needed, the facility shown to Hecker is thought to have been built with foreign help in disregard of UN Security Council sanctions on North Korea.

The facility is thought to have been built within a short period of time because U.S. officials said to The Times that they don’t think it existed in April 2009 when Americans and international nuclear inspectors were ordered out of North Korea.

Pyongyang expelled inspectors in response to a UN statement condemning North Korea’s launch of a long-range rocket on April 5, 2009.

A Blue House official told the JoongAng Ilbo under condition of anonymity that the facility could not have been built within the past one or two years.

“Seeing what North Korea [said to Hecker], it seems like they have been working on this [for some time],” said the source.

“We don’t know where the exact location is,” said the source. “And this kind of facility can easily be relocated. It’s a very serious situation as to how we can conduct six-party denuclearization talks from now on. We’ll discuss whether to have a specific negotiations on uranium enrichment in the six-party talks.”

Hecker couldn’t verify that the facility was enriching uranium.

“The government has been concerned about North Korea’s nuclear efforts, and if the North’s claims that they are enriching uranium are true, we feel that it is a serious problem,” said the South Korean Ministry of Foreign Affairs and Trade yesterday.