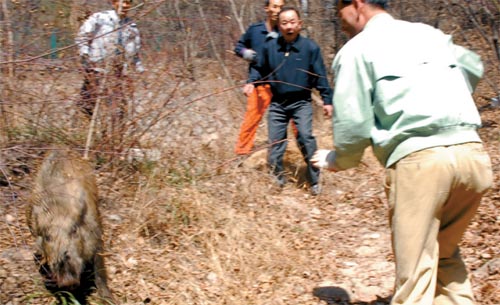 A wild boar near Samcheong Park, central Seoul, is captured by a 119 rescue team Saturday. About 40 boars have appeared in cities this year. [NEWSIS]


Wild boars are showing up on highways and in the middle of Seoul, as the global climate gets warmer and their natural habitat shrinks because of constant development.

Seoul’s Jongno Fire Station got a call from a taxi driver at 12:47 a.m. yesterday saying a wild boar had appeared near Samcheong Park, central Seoul, and was wandering behind a wire fence. A 119 rescue service team flanked the boar and captured it with an anesthetic gun at 3:17 a.m.

“In early October, a local resident saw a wild boar in the park and it fled back to the mountain [behind the park],” the fire station said.

Four other boars have been captured in Seoul this year. A female boar bit a 67-year-old resident on Nov. 12 in Yeoju County, Gyeonggi and was later fatally shot by a police officer.

On Oct. 29, a one-ton truck ran into a boar on a highway between Busan and Ulsan, and the driver was severely injured.

According to the Ministry of Environment, the number of boar appearances is estimated to be about 40 so far this year, higher than the 31 appearances in 2009. Gamekeepers captured 7,715 boars last year to prevent attacks on humans and damages on crops, but they are still increasingly showing up in cities.

“Global warming has helped more boars survive the winters,” said Lee Wu-sin, a forest sciences professor at Seoul National University. “Some of them have been expelled from natural habitats after power struggles with their peers.”

Experts say that shrinking natural habitats have also put wild boars on the roam. The Environment Ministry said the number of boars living in mountains shrunk from 4.6 per 100 hectares (247 acres) in 2006 to 3.7 in 2009.

“Although the number of boars is decreasing, it still exceeds the advised level of 1.1 per 100 hectares,” said Choe Jong-won, a ministry official. “And that statistic doesn’t include boars wandering in cities.”

The ministry said in 2005 that about 10 wild boars per 100 hectares were living in metropolitan areas. The ministry estimates a total of 230,000 boars living in Korea.

The ministry announced a policy yesterday to let citizens capture more boars, from three to six per person, and said it would distribute traps.