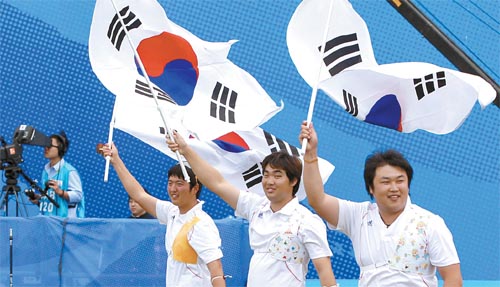 The Korean men’s archery team, from left, Kim Woo-jin, Im Dong-hyun and Oh Jin-hyek celebrate their gold medal win over China in the finals at the Aoti Archery Range in Guangzhou, China yesterday. By Kim Sung-ryong


The men’s archery team continued its dominance at the Asiad, winning its eighth consecutive gold dating back to 1982, at the Aoti Archery Range in Guangzhou, China, yesterday.

Korea’s trio, consisting of Im Dong-hyun, Kim Woo-jin and Oh Jin-hyek, defeated China 221-218 in the finals. After failing to pick up a medal at the 1978 Bangkok Asiad when the event was first introduced, the Korean men’s archery team has now won gold in every Asian Games since the 1982 event in New Delhi.

As expected, the two sides were involved in a tight competition and were tied at 56 after the first end. Korea and China traded leads in the following two ends and Korea entered the final end trailing their Chinese opponents, consisting of Chen wenyuan, Dai Xiaoxiang and Xing Yu, by a single point. 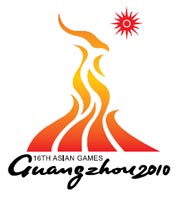 With the gold medal on the line, the Korean men hit the center area of the target three times for a total of 54 while the Chinese failed to hit a single bull’s-eye. What cost the Chinese men the gold medal came in the second last shot when Dai hit a six-point shot on his second try. The Chinese settled for a disappointing 49 points in the final end.

Kim, 18, is the youngest member on the squad but displayed the form of a veteran yesterday, hitting the center of the target for a perfect 10 on five of his eight shots. He hit nine’s on his other three shots.

Kim came off a world record-setting performance in the qualifiers on Saturday with a score of 1,387. Oh had held the previous world record of 1,386, set in September 2009.

The most intriguing archer on the squad is Im, who has now won three consecutive Asiad gold medals in the men’s archery competition. But what’s most impressive is that he’s accomplished so much in sporting competitions despite being legally blind with 20/200 eyesight. Im, the ace of the squad, was part of the 2004 and 2008 Olympic gold-medal winning teams and also won the team event at the 2002 Busan Asian Games, as well as the team and individual events at the 2006 Doha Asian Games.

Im can see enough to differentiate colors - sections of the archery target are different colors - but refuses to wear glasses or contact lenses during competition.

Earlier in the day, Korea cruised past Qatar in its round of 16 match, 225-196, and held off Thailand, 229-208, in the quarterfinals to earn a spot in semifinals with India. Korea easily won its semifinals match as well, downing India by a score of 222-216.