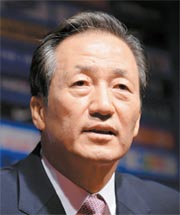 Korea is seeking to unite Asia around its bid to host the 2022 World Cup, said FIFA vice president, Chung Mong-joon, on Monday, with the world body’s vote set for next week.

Four nations in the Asia-Pacific region - Korea, Australia, Japan and Qatar - are vying to host the 2022 event, up against competition from the United States. The world body, consisting of 22 FIFA executive committee members, is scheduled to pick the hosts for the 2018 and 2022 World Cup on Dec. 2.

“The competition to host the 2022 World Cup will be Asia versus the United States,” Chung said in a press conference. “Four nations in the Asia region are competing in the race so votes could be divided. Over the next 10 days, we will attempt to build solidarity in Asia and then move on to the next stage in which Korea will be named the host.”

Chung said he was leaving for Kuala Lumpur, Malaysia, later in the day to appeal for support from the Asian Football Confederation, three members of which have voting rights in the upcoming FIFA decision. Chung hoped that the upcoming elections in the Asian football body would bolster their cause to bring the World Cup tournament to the region. Korea co-hosted the World Cup tournament with Japan in 2002.

“Some countries like the United States say they cannot understand why Asia is bidding for the World Cup just eight years after the tournament was held here,” said Chung, also a six-term lawmaker of the ruling Grand National Party. “But our bid is not for an immediate tournament. We still have 12 years left, and it will be 20 years since the last World Cup was held in the region. Twenty years is a very appropriate cycle.”

Blatter has “stressed repeatedly that Korea’s hosting of the World Cup will contribute to peace in Northeast Asia,” Chung said.

North Korea reached the World Cup finals for the second time in its history at the South Africa tournament this year. Its squad was eliminated in the group round after tough matches against Portugal, Brazil and the Ivory Coast.

The Korean bid committee’s proposal to host some of the games in North Korea has reportedly been viewed positively by FIFA officials.

“We have received a favorable review from FIFA and with a little more support from the Korean public, I think we have a good chance at winning the bid,” said Chung.

Korea is banking on its strong government support, high-quality IT infrastructure and advanced transportation systems to garner high scores from FIFA officials.

“I’ve met with [President Lee Myung-bak] twice about whether he would be appearing at the presentation next week,” said Chung. “All other bid committees will have their leader present. I expressed the need for the president to lend his support and he is reviewing the case favorably.”

Citing the FIFA voting process, which is repeated for as many rounds as necessary until one candidate gets a majority, Chung said Korea will try to win support from those who make early exits.

Korea will also step up its pitch to European FIFA committee members, whose votes will be crucial in deciding the winner, he said.

“As FIFA vice president, I will talk with them as much as I can during the next 10 days,” he said.