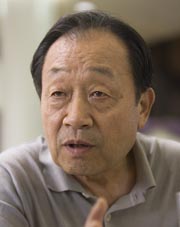 Veteran actor Shin Goo was among the 32 people honored on the inaugural Pop Culture Artists’ Day yesterday, the Ministry of Culture, Sports and Tourism said.

Three Bogwan culture medals, the highest honor to be conferred on that day, were bestowed upon Shin, veteran comedian Im Hi-chun and voice actress Ko Eun-jeong.

Since his debut as a theater actor in “Bull” in 1962, Shin has devoted his life to acting, playing numerous roles in television dramas and movies over his 50-year career, the ministry said.