Re-examining our history with Taiwan

Re-examining our history with Taiwan 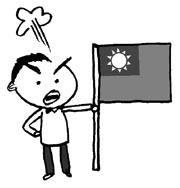 On Aug. 24, 1992, the Embassy of the Republic of China (commonly known as Taiwan) in Myeong-dong, Seoul, lowered its national flag for the last time. The resident ethnic Chinese were sobbing as they sang their national anthem, part of which goes: “Three principles of the people/our aim shall be: to found, a free land, world peace, be our stand.”

That was the day when Korea, then under the Roh Tae-woo administration, entered formal diplomatic relations with China and ended its relations with Taiwan. All government treaties were repealed, and flights and boat voyages to Taiwan were discontinued. One hundred and ten years after Chinese people settled down in Korean society in 1882, Taiwan was abandoned by Korea. Six months later in February 1993, the Chinese flag was hoisted in front of the former ROC Embassy in Myeong-dong.

As a part of a divided nation fighting against Communism during the Cold War, Taiwan shares a painful history with Korea. Therefore, the start of Korea’s diplomatic ties with China was seen as an act of betrayal by the Taiwanese and Koreans alike, and many Koreans were sympathetic towards Taiwan. However, Taiwan understood Korea’s position that Seoul could not afford to hold on to the historical friendship when a new international order was forming.

Although the Korean flag was burned and eggs were thrown at the Korean Embassy in Taipei, the anti-Korean sentiment was relatively negligible. Today, Korea is Taiwan’s fifth-largest trading partner. Since the early 2000s, relations between our two countries have improved on the back of the Korean wave, with the popularity of television dramas and Korean pop songs. Taekwondo is also popular, and Taiwanese athletes won two gold medals in the Athens Olympics in 2004.

Despite the good relationship we have built with Taiwan since restarting relations with China, anti-Korean sentiment flared again recently in Taiwan when Taiwanese martial artist Yang Shu-chun was disqualified from the Asian Games in Guangzhou for having a (preapproved) extra sensor in her socks.

In response, Korean flags have been burned and Korean products boycotted. They claim that China and Korea made a deal and stole the gold medal. The claim is unfounded, but the Taiwanese do not seem to buy Korea’s appeal of innocence.

Maybe we should reflect on whether we’ve upset Taiwan in another way, but the Taiwanese should, too.