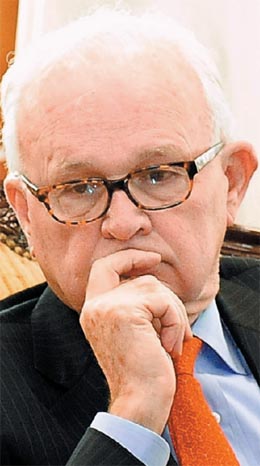 Countries with a stake in the protracted multinational efforts to denuclearize North Korea are crafting a concerted reaction, possibly including new sanctions, to the North’s latest nuclear disclosure that it is equipping itself with another capability to produce nuclear weapons.

“This is obviously a disappointing announcement. It is also another in a series of provocative moves [by the North],” Bosworth told reporters after closed-door meetings with South Korea’s Foreign Minister Kim Sung-hwan and South Korea’s top nuclear envoy Wi Sung-lac.

Bosworth’s trip to East Asia follows the North’s revelation of uranium enrichment facilities, including 2,000 centrifuges, to a U.S. scientist, raising suspicion that the North is close to mastering uranium-based nuclear weapons production in addition to its plutonium-based one.

Meanwhile, South Korea’s Defense Minister Kim Tae-young said yesterday that he will consider talking with the U.S. about bringing back U.S. nuclear weapons to deal with the increasing nuclear threat from the North. In 1991, the U.S. withdrew most of its tactical nuclear weapons overseas, including from South Korea, with the end of the Cold War.

Bosworth left for Japan yesterday to meet other East Asian officials. He is set to fly to China today. Wi also left for China yesterday afternoon to talk with his Chinese counterpart, Wu Dawei.

According to a high-ranking official in the Ministry of Foreign Affairs and Trade, Bosworth and Wi in their Seoul meeting shared the view that the latest disclosure confirmed their longtime suspicion of the North’s uranium enrichment activities, including the existence of centrifuges.

The breached international regulations refer to United Nations resolutions, including Resolution 1874 that bans the North from exchanging weapons technology with other countries or from engaging in weapons-related international financial transactions. The rapid construction of 2,000 centrifuges, which were not at the North’s Yongbyon nuclear facility as of April 2009, suggests foreign help.

Ileana Ros-Lehtinen, a Republican congresswoman who is the likely incoming chair of the U.S. House Foreign Affairs Committee, issued a statement urging the U.S. State Department’s top arms control official to re-list North Korea as a state sponsor of terrorism, a designation that was dropped in 2008.

Many in the Japanese media called it brinkmanship by the North. Japanese Chief Cabinet Secretary Yoshito Sengoku also said, “If true, it is worrisome [to regional security].”

The Chinese government and its media kept mum on the issue. Observers say China will clarify its stance to Bosworth and Wi.

Siegfried Hecker, a Stanford University nuclear scientist, detailed his recent trip to North Korea’s main nuclear complex in Yongbyon in a report posted on his school’s Web site on Saturday.

In the report, Hecker said that he had seen a uranium enrichment facility with 2,000 centrifuges along with a small-size experimental light-water reactor at Yongbyon.

North Korea told Hecker that the light-water reactor will use enriched uranium to generate electricity to meet its chronic electricity shortage.

But some observers say the North’s disclosure of the facilities through Hecker is to notify progress in its plan to develop nuclear weapons with enriched uranium, in addition to its plutonium-based nuclear weapons it developed before allegedly shutting down the Yongbyon reactor.

According to some experts, even with additional sanctions, the North’s uranium enrichment program will complicate international efforts to engage the North to abandon its nuclear ambitions.

Plutonium, a nuclear weapons fuel that the North has resorted to over the past decades, is easily detectable by international watchdogs because its production relies on heavy facilities that reprocess spent nuclear fuel rods.

On the other hand, enriching uranium, which can lead to a nuclear weapon, is possible with small-size facilities and is thus easily disguised. Enriched uranium is usually for civilian use, for generating electricity, but techniques acquired and developed along the way can produce highly enriched uranium, another source of nuclear bomb.

“North Korea’s uranium enrichment activities should have been paid attention to much earlier,” said Jeung Young-tae, a researcher at the Korea Institute for National Unification.

The U.S. and South Korea, which shared intelligence with each other, have suspected that Pyongyang was involved in a uranium enrichment program since early 2000, but few actions were made on it. Last year, the North claimed that it was in the final stage of enriching uranium and said in March it will build a light-water reactor using uranium it enriches.

“Enriched uranium is easy to hide, and it does not even require a nuclear test,” said Jeung. “Along with already acquired plutonium weapons, it will put North Korea in a better position to deal with the countries under the six-party talk framework.” The six-party talks, currently on hold, also involve Japan, China and Russia.

Some analysts say the recently revealed nuclear scheme is a ploy by the North to draw the U.S. into talks with it and gain concessions from the U.S. over issues such as food aid and international sanctions.

Others suspect it’s part of a scheme of the ongoing succession scenario, aimed at raising credentials for Kim Jong-un, the heir apparent. His father, Kim Jong-il, gained political power on the success of developing plutonium-based weapons.