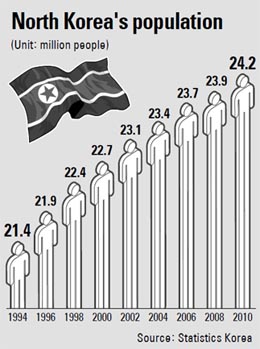 North Korea’s population is a little less than half the size of South Korea’s following a long famine, a South Korean government report said yesterday.

The statistics are based on population censuses conducted in 1993 and 2008 by North Korea and the United Nations Population Fund.

“North Korea clearly reflects the societal changes in its population,” the report said, adding that there is almost no immigration or emigration.

The famine resulted in a high mortality rate among infants and young children as well as seniors, according to the report. Pregnant women were perhaps worst off, experiencing malnutrition that often resulted in deaths of both the mother and unborn child. Also, based on a survey of North Korean defectors to South Korea, the average height and weight of a younger North Korean is significantly lower than their South Korean counterparts.