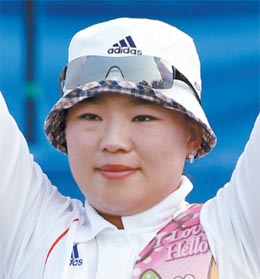 Yun Ok-hee won her second gold medal of the 2010 Guangzhou Asian Games - the first individual gold of her career - in the women’s archery individual event at the Aoti Archery Range yesterday.

Yun was in near perfect form yesterday as she blanked Cheng Ming of China in the finals, six set points to none, to earn her first ever individual gold. Yun won all her sets (27-25, 28-27, 28-27) and was awarded two set points each for a total of six set points to Cheng’s nil. Competitors are given three shots per set and are awarded two points for winning sets and a single point for tied sets.

Yun had won a total of three team gold’s including an Olympic gold at the 2008 Beijing Summer Games but had come up short in individual competitions, earning a bronze in Beijing in 2008 and a silver at the 2006 Doha Asiad.

Yun also cruised through the early elimination rounds by defeating Urantungalag Bishindee of Mongolia six set points to none in the round of 16, Farida Tukebayeva of Kazakhstan 7-3 in the quarterfinals and Deepika Kumari of India 6-2 in the semifinals.

North Korea’s Kwon Un-sil defeated Kumari 6-2 in the bronze medal game. Meanwhile, Yun’s teammate Ki Bo-bae, 22, lost in the quarterfinals to Cheng. In a tightly contested match Ki and Cheng were tied after the first two ends before Cheng nailed three perfect 10’s in the third end to distance herself from her opponent. Cheng ended up winning six set points to four.

Ki had been among the top prospects in recent years but failed to get past the quarterfinals at national team tryouts several times. She increased the intensity of her training this year and after making the national team, trained in windy conditions at Jeju Island and at loud and open-to-the-public practices at baseball stadiums.

She came up short in individual competitions but played an integral role in the women’s team’s gold medal winning performance against China on Sunday.