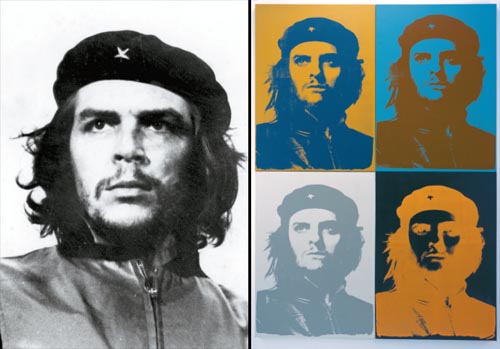 
A large-scale exhibition of works by the Cuban photographer Alberto Korda (1928-2001) starts today at COEX in Samseong-dong, southern Seoul. The show, which runs until March 1, features 200 works, including “Guerrillero Heroico” (“Heroic Guerrilla”), the legendary photo of the Cuban revolutionary Che Guevara.

Andy Warhol used that image for his silkscreen works, making the photo more popular in capitalist America. The work also aroused the criticism that Warhol had helped turn the image of the Marxist revolutionary into a commercialized icon - an extreme irony.

Now, an artwork based on Warhol’s Che Guevara is on display at the Park Ryu Sook Gallery in Cheongdam-dong, southern Seoul. It is part of Gavin Turk’s first solo show in Korea. Turk is one of the Young British Artists. His work “Four Che, Seven Hues” (2005) features Turk disguised as Che. This and his many other works reproduce the signature styles of famous artists to raise issues of authorship, authenticity and identity.