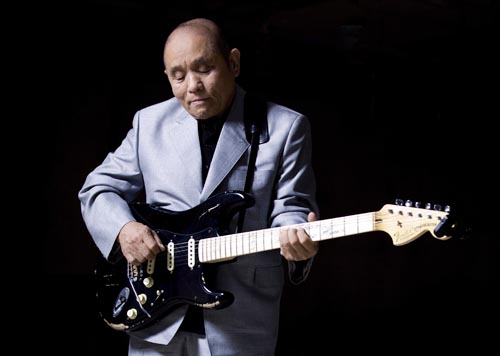 Shin Joong-hyun, the 72-year-old guitarist known in Korea as the godfather of rock, presents a month of concerts at the Daehangno Small Theater in Seoul. Shin is the first Asian musician to have a tribute guitar made for him by Fender Musical Instruments Corp. See MUSIC, below. [JoongAng Ilbo]

Today: This concert features songs from the lyric opera canon, with the Prime Philharmonic Orchestra and a host of opera stars providing the music, including sopranos Kim Young-mi and Kim Eun-ju, tenors Kang Mu-rim and Na Seung-suh and baritones Wo Ju-ho and Jang Yu-sang. Violinist Baek Ju-young will also perform.

Sunday: In this concert celebrating 20 years of diplomatic relations between Korea and Russia, Russian pianist Miroslav Kultyshev will play Chopin’s Concerto for Piano and Orchestra No. 1, as well as Chopin polonaises, nocturnes and etudes. He will be joined by the Millennium Orchestra.

Dec. 1: Inessa Garante, who is originally from Latvia, became famous after her debut in 1995 with Giulio Caccini’s “Ave Maria.”

In this performance, Garante will sing “Lascia chi’io pianga,” from Friedrich Handel’s opera “Rinaldo” and “Vissi d’arte, vissi d’amore” from Giacomo Puccini’s opera “Tosca,” among others.

Pop singer Kai will join Garante for a duet of “Libiamo” and “Time to Say Goodbye” from Giupseppe Verdi’s opera “La Traviata.”

Dec. 3 to 10: Pianist Richard Clayderman brings his renditions of classical and pop songs to Korea, where he is doing a seven-city tour to Busan, Ilsan, Daegu, Jeonju, Changwon, Seoul, and Jinju. Clayderman’s album “Ballade Pour Adeline” has sold more than 22,000 copies. His repertoire includes Gershwin’s “Rhapsody in Blue,” Vangelis’ “Chariots of Fire” and classic Korean pop songs like “To J” (originally recorded by Shin Seon-hee) and “Invisible Love” (originally recorded by Shin Seung-hun).

Clayderman performs in Seoul at 8 p.m. on Dec. 4 at Goyang AramNuri Arts Center and on Dec. 9 at Kyunghee University’s Pyunghwa Theater.

Dec. 7: Handel’s “Messiah,” one of the most well-known religious works in the Western choral canon is the centerpiece of this year-end concert.

Dec. 10 to Jan. 15: The legendary 72-year-old guitarist known in Korea as the godfather of rock presents a month of concerts. He chose Daehangno Small Theater because it was where he performed in 1960 at the height of his career. He will perform his hits “Lover in the Rain,” “One Cup of Coffee,” “My Love,” “Beauty” and more.

To Dec. 5: The first play in the Seoul Arts Center’s masterwork series is a humorous and heart-warming story about a family struggling to survive the Korean War and its aftermath.

Kyungsook hates her father, a janggu (Korean drum) player who spends his time drinking instead of taking care of his mother, wife and two young daughters. When the war breaks out, he runs away, leaving his young daughters to look after the family. When he finally realizes his mistake, he returns for his family, only to discover that they have already moved on without him.

Tomorrow to Sunday: Austrian composer Alban Berg’s opera “Lulu” will be presented in Korea for the first time. Lulu is the story of a woman who goes from the height of popularity to the depths of despair, and has many affairs in between. This opera is known for the discordant melody that makes the audience feel the characters’ emotions. Soprano Park Eun-ju stars as Lulu.

The production is directed by Park Sae-won.

Dec. 18 to 26: Actor Bae Su-bin (SBS’s “Shining Inheritance” and MBC’s “Jumong”) stars in this show about the life of legendary poet Yi Sang.

The performance is open for people ages 16 and up.

To Saturday: This festival highlights some of the latest trends in graphic art, sculpture, furniture and painting with pieces from a variety of emerging artists. Jung Chan-woo, a well-known young artist, will display his new work in a collection called “Shoot for Your Dreams.”