At last, wisdom from the Catholic church

At last, wisdom from the Catholic church 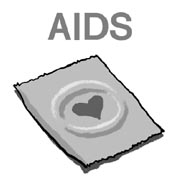 Barbara Samson grabbed the attention of the French in 1996. There was nothing much to distinguish her from other youths except that she had been infected with HIV at the age of 17 as a sophomore in high school.

Although the terror of AIDS was sweeping through society at the time, Samson stood firm against the social prejudice it engendered. She wrote a book about her life, and it was dramatized and broadcast by a television station under the title, “Being Seventeen.” Working for Jamais Sans Chapeau, an AIDS prevention organization, she alerted the public to the spread of AIDS. Her desperate appeal - “I always worry about the end of my life that may come at any moment,” she’d say - touched the hearts of many.

AIDS became known to the world when five homosexual people in Los Angeles were identified as AIDS patients. Two years later, the Pasteure Institute isolated HIV, the virus that causes AIDS, for the first time. Since then, AIDS has been called “the plague of the 20th century.” Although the whole world has tried to eradicate the disease, declaring a war on AIDS, the number of people with HIV, which was below 10 million in 1990, surpassed 30 million in the 2000s, when newborn babies and children were added to the number of new patients.

Until recently, the Catholic church opposed the use of contraceptives such as condoms, which can reduce the risk of infection. But even the Vatican has recently implied a change, saying in effect that if condoms prevent the spread of AIDS, they can be used in some cases. According to The New York Times, Pope Benedict XVI, in interviews with a German journalist, said, “There may be a basis [for condoms] in the case of some individuals, as perhaps when a male prostitute uses a condom, where this can be a first step in the direction of a moralization, a first assumption of responsibility.”

This is a good sign. I think one of the roles of the church is to provide direction that prevents people from becoming victims of AIDS as Samson was.