[In-depth interview] New media and the future of books

[In-depth interview] New media and the future of books 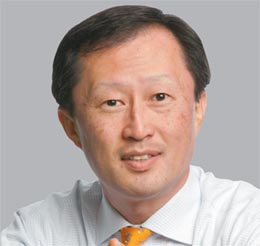 At the center of a historic shift in publishing is Korean-American Chi Young-suk.

He was chosen to be president of the International Publishing Association last month. It is the first time a person of Asian descent was elected to the top post of the influential group based in Geneva, which represents the best interests of 70 publishing companies in 57 countries.

“I will do my utmost to help publications keep their influence in society [as president of the IPA],” Chi said in a recent interview with the JoongAng Ilbo.

As the youngest son of Chi Sung-gu, a former Korean ambassador to Finland and Senegal, Chi was born in the United States in 1961. He majored in economics at Princeton University and earned an MBA from Columbia University.

His successful career earned him a spot on this year’s Forbes Asia list of the 25 most prominent Korean-Americans.

The JoongAng Ilbo sat down with Chi in Frankfurt then in Seoul to talk about the future of books.


Q. As president of the IPA at a time of crisis in publishing, where do you begin?

A. The biggest challenge is imminent for the world’s publishing industry. In order to cope, publishers all around the world are discussing ways to protect intellectual property. I also hope I can contribute to helping publications keep their influence in society.

Do you see the advent of e-books as a crisis for your industry?

You need to take a closer look. The publishing industry has three categories: educational materials, specialty publications and general books.

Ninety percent of specialty publications such as journals have been digitalized. General books face the biggest threat from e-readers. I believe these gadgets will spread like wildfire.

Can you be more specific about the future of e-books?

I expect that 75 percent of people who were born after 1990 will use e-readers within 10 years, while 50 percent of those born before 1990 will move to the devices. Paper books won’t disappear, though.

Tell us more about the future of the publishing industry.

Content and technology can’t be separated. Books and other publications will be more interactive than now. In the past, readers simply consumed output from writers, but two-way communication between readers and writers will be possible in the future.

Were you a bookworm in school?

Never. To be honest, I can’t name a single book that impressed me. I was just struggling to keep up with classes. I transferred schools 14 times and changed my second foreign language (after English) six times.

Then when did you fall in love with books?

When I worked at American Express, I was always with a book. When I was with Random House, I read about 300 books a year. Now I have reports to read through, so I read about 50 books per year.

Everyone has his or her own reading habits. What are yours?

I can’t throw away a book. I have about 5,000 books at home. Another habit is that when I go to someone’s home, I always look at their bookshelf. By doing so, I can get to know their interests.

Your conversations with people must primarily revolve around books.

I always ask people which books have impressed them the most. Answers vary. One famed religious leader in the United States picked a biography of another religious leader. One college dean chose a comic book.

How do you identify a good book?

First, content should be creative and unique. Second, a book needs to give a timeless message to readers. Third, a book should let us know how to live for the present.

Can you recommend a couple books for our readers?

I like human-centric stories because, after all, we learn a lot from people. For this reason, I prefer to read memoirs or biographies.

I highly recommend “Personal History” by Katharine Graham, the former publisher of The Washington Post. I especially liked the part where Graham mentioned her past faults in an honest way. Another book I recommend is “A Child Called ‘It’: One Child’s Courage to Survive.” Based on the true story of writer Dave Pelzer, it depicts his troubled childhood and getting abused by his alcoholic mother.

In Korea few young people actually pick up books. What effect could technology have on declining rates of young readers?

It’s pretty much the same overseas. Everyone is always busy and there are many other options instead of picking up a book. But with the spread of e-book readers, I believe more people will read.

Korea expected to see its first Nobel Prize winner in literature this year, but it didn’t work out. Thoughts?

Korea deserves to receive the Nobel Prize, but there should be extra effort if it expects to grab the prize.

Korean books are excellent, but there are few people who can translate them in the right way. I think the chance will come again someday.