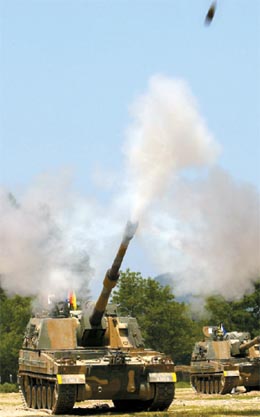 Yesterday’s provocation by North Korea - which fired a barrage of artillery rounds at Yeonpyeong Island - took South Korea by surprise because of the extent of the assault. This was North Korea’s first aerial attack directly targeting South Korean land since the Korean War.

Observers are puzzled over the motives of the North because the attack seemingly did little to benefit the North at a time when South Korea and the U.S. are coordinating serious countermeasures to the North’s latest nuclear disclosure.

The disclosure, through a U.S. scientist over the weekend, heralded its progress on acquiring an alternative way to develop nuclear weapons and has raised security alerts in neighboring major political powers, including its ally China.

The artillery attack on Yeonpyeong Island ostensibly targeted a military training exercise in the area being conducted by South Korea at the time.

The Blue House said it received a letter from the North earlier yesterday protesting the drill, which the North called a provocation.

Experts, however, said the drill was only a pretext for the North to achieve bigger objectives.

Yang Moo-jin, a professor at Kyungnam University, called the attack a tension-building measure aimed at further urging the U.S. to talk with it.

“Because the revelation of the uranium enrichment facilities did not drive the U.S. to move as much as it wants, it seemed to have moved further with a message demanding that the U.S. come to the table before it is too late,” Yang said.

“It considers South Korea’s passiveness in resuming the stalled tourist program to the North’s Mount Kumgang as a lack of will to do so, and acted to change the situation on the pretext of protest over the military training,” said Jung.

Jung added that the North appears to see the artillery provocation as a momentum builder for the two sides to discuss more inter-Korean cooperation, including the tourist program, which used to be a crucial source of cash for the impoverished North until 2008.

Yoo Ho-yeol, a professor at Korea University, said the attack is part of efforts to bolster the ongoing succession process in the North. Creating tension with the rest of the world will help enhance the loyalty of its people to heir-apparent Kim Jong-un, he said.

Some, like Cho Myung-chul, a researcher at the Korea Institute for International Economic Policy, said the attack was the result of excessive allegiance by some hard-liners in the North.

Asked about the chance that the situation would develop into war, Yang said that it is unlikely, given probable objections from China and the impact it would have on succession in the North.

Jung said the attack will probably complicate the resumption of six-party talks.