Fury over the attack: ‘I can’t bear this anymore’

Fury over the attack: ‘I can’t bear this anymore’ 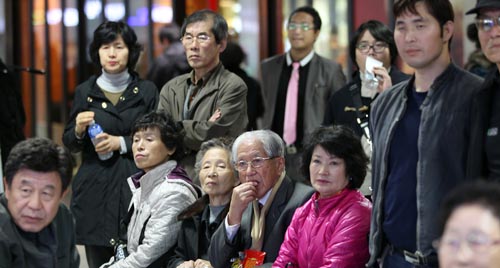 Korean citizens with grave and startled faces watch breaking news at Seoul Station yesterday afternoon after North Korea’s artillery attack on Yeonpyeong Island, in which more than 100 rounds of artillery were fired. [YONHAP]

A civilian, Ju Hyeon-wu, living in Suwon, Gyeonggi, said: “We should not accept North Korea’s attacks on the island at this moment and not much time has passed since the sinking of the warship Cheonan.”

“Soldiers died again [just a few months after the Cheonan incident] ... I can’t bear this anymore. We must take a response in retaliation for North Korea’s attack,” Lim said.

“It is the first time for me to experience this,” Lee said. “I am really frightened if a war occurs and kills all of us.”

“I think North Korea did this at a timing they planned carefully, waiting until after the G-20 Summit,” Gweon said. “I feel outraged by the North.”

Social networks also heated up with vitriol and anger directed at the North.

A twitterer with the ID “regalodegato” tweeted at 5:06 p.m.: “I think North Korea can’t break out into a war at this moment because it is now getting ready for a power succession. A series of recent incidents - the sinking of the Cheonan, the revelation that it has uranium enriching centrifuges, and the sudden bombing on Yeonpyeong Island - are being done on behalf of the heir-apparent, Kim Jong-un, who has little achievements to boast of yet.”

A user with an ID “bang_girl” uploaded a message on Me-today, a Korean version of twitter: “How come the North staged an incident like this! They pay back our favors with revenge.”

Kim Yun-tae, chief official for Network for North Korean Democracy and Human Rights, said the government should take a firmer attitude toward the North.

“If the government keeps its vague attitude toward North Korea’s provocative acts, another incident like this will happen again,” Kim said. “I think North Korea is stoking tensions to stabilize the succession of Jong-un.”