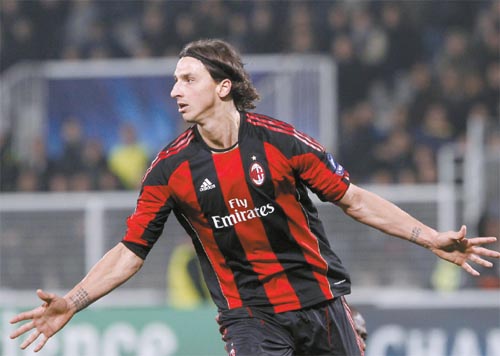 AC Milan’s Zlatan Ibrahimovic celebrates after he scored a goal against Auxerre during their Champions League football match in Auxerre, France, on Nov. 23. [AP/YONHAP]


LONDON - Former winners AC Milan reached the last 16 of the Champions League on Tuesday while Olympique Marseille clinched a place in the knockout stage for the first time since they took the title in 1993.

Ibrahimovic had previously crushed Auxerre in September’s group opener when he scored two goals in three minutes to give Milan victory.

“That is what it is like to play against talented players. With half a chance, they sweep the ball home. They have Ibrahimovic up front who can make the difference anytime he wants”, Auxerre midfielder Benoit Pedretti told French channel Canal plus.

Arsenal needed only a point to join them with a game to spare but again suffered a late collapse and conceded twice in the last seven minutes to lose 2-0 at Braga, the Portuguese side they beat 6-0 in their opening match.

Shakhtar Donetsk seized the opportunity to push Arsene Wenger’s men off the top of Group H with a 3-0 win at Partizan Belgrade that left them on the verge of going through and condemned the Serbians to a fifth straight loss. With already-qualified Bayern Munich losing 3-2 at AS Roma

in Group E after leading 2-0 at halftime, Group F leaders Chelsea ended the night as the only side remaining in the competition with a perfect winning record.

The English champions, with nothing at stake and fielding a depleted team, put domestic crisis talk to one side with a labored 2-1 win at home that condemned Slovakia’s MSK Zilina to a fifth successive defeat.

Zilina still gave Carlo Ancelotti’s side a scare, taking the lead after 19 minutes through Babatounde Bello and keeping Chelsea waiting until Daniel Sturridge equalized in the 51st.

Florent Malouda made it 2-1 four minutes from time.

Milan went through behind rampant Real Madrid, 4-0 winners at Ajax Amsterdam thanks to a brace from Cristiano Ronaldo and goals from Karim Benzema and Alvaro Arbeloa. Ibrahimovic broke the ice for the Italian side in the 64th minute with his fourth goal in five Champions League matches this term, before Ronaldinho added the second in added time.

Marseille went one better in Russia. Spartak had failed to beat French opponents in Moscow in

five previous attempts in the Champions League and their hopes of success in the sixth had already faded before they lost Brazilian striker Welliton to a red card in the 64th.

Bayern Munich surrendered their 100 percent record at Roma’s Stadio Olimpico despite Mario Gomez scoring two quick fire strikes in the 33rd and 39th to send them in 2-0 up at halftime. Roma fought back with goals from Marco Borriello, Daniele de Rossi and substitute Francesco Totti, who converted an 84th minute penalty for the winner.Swiss champions FC Basel kept their hopes alive of getting out of Group E with a 1-0 win over Romania’s CFR Cluj.