A banquet before us but no satisfaction

A banquet before us but no satisfaction 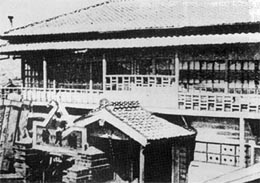 In 1900, Empress Dowager Cixi of the Qing Dynasty called in a renowned local chef and gave him the difficult order to prepare a dish that she had never tasted - or die trying. The chef agonized over what to prepare and finally cooked dumplings stuffed with powdered pearl. Powdered pearl has no taste, but the cook saved his life by linking the regality of the pearl to the dish. The empress did this because she had everything yet was still not satisfied.

In 1907, Imperial Japan forced King Gojong to step down and took control. They appointed Japanese officials as managers and drove thousands of Koreans from the court. A total of 166 officials, 3,809 workers, 232 gisaeng courtesans and 317 others were sacked en masse. Among them were the king’s chefs and gisaeng, who helped prepare the royal banquets.

An Sun-hwan, a mid-level official of the royal cuisine office in the Joseon Dynasty, opened a restaurant called Myeongweolgwan in 1903 in Seoul with the assistance of the chefs and gisaeng who were driven out of the royal court. Since kings Gojong and Sunjong were still alive, he could not advertise that he served “royal dishes,” but for his wealthy customers he prepared the same dishes he had served the king.

Myeongweolgwan became more famous after the collapse of the Joseon Dynasty and continued its success even after Korea was liberated from Japan. Many Koreans lived with the hope that they would one day taste the same food that was once served to the king.

In those days, the king demanded his food be made from ingredients of the highest quality. This presented a difficult conundrum for royal chefs like An because in those days, it wasn’t always easy to get the highest quality ingredients. The chefs couldn’t serve lower quality food just because they couldn’t get ingredients of the same quality as the previous year, especially to a king who remembered what a dish tasted like it was served to him before. As a result, the best way for the chefs of the royal court to keep their position was to cheat a little and use ingredients of a slightly lower quality when they couldn’t get everything they needed or when they anticipated a shortage. Therefore, a special dish served at Myeongweolgwan could have been better than the one actually served on the royal table.

Nowadays, we eat food and wear clothing that is of higher quality than the royals did. But we are still not satisfied. Our problem is our desire, not the ingredients.