Amid the grief, families angry over pace of probe

Amid the grief, families angry over pace of probe 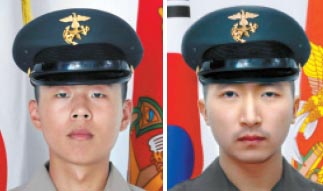 The families of the two deceased marines - Moon Gwang-wook and Suh Jeong-woo - were mourning the loss of their relatives yesterday. The two marines, 20- and 22-years-old, respectively, were performing compulsory military service when they died in the North’s attack on Yeonpyeong Island. Military officials praised the marines for their service yesterday.

Private Moon had joined the military in August and was recently deployed on Yeonpyeong Island. Moon leaves behind a 14-year-old sister and an elder brother with a mental illness. He was the “hope of his family,” according to his aunt.

Moon’s sister, Joo-mi, said, “I still can’t believe that my brother died. He was such a nice person, was good to mom and dad, helped other family members and was a great brother to me.”

The bereaved families are deploring the lack of details they have received regarding the deaths.

A memorial altar was set up yesterday at the Armed Forces Capital Hospital in Gyeonggi.

But an uncle of Sergeant Suh said, “We can’t hold a funeral without any explanation from the government on the precise cause, circumstance and time of the accident. Upon our request of the details, [the government] gave us a very short briefing.”

During the briefing yesterday by Jeon Byeong-hun, a deputy commander of the Marine Corps, a bitter dispute developed between family members and military personnel. But the military defended its actions.

Jeon told family members about the funeral plans - a five-day mourning period would start Saturday if the bereaved family members agree. However, the families responded that information on how far the investigation has progressed and how much longer it will take should come first. Lt. Cmdr. Lim Jun-sun, who is with the military police, told the families the investigation was moving forward.

“The investigation team will go to Yeonpyeong Island to gather as much information as possible,” said Lim. “Afterward, the team will provide an account of what happened.”

Family members of Suh, however, were enraged.

“They say nothing about whether they are searching for a leg [The marine apparently lost his leg in the accident],” said one of his uncles. “There is no account on the cause of Suh’s death. What they only say is ‘we will continue to investigate.’”

In the case of Private Moon, however, his body was sent to the National Forensic Service, according to the military. Moon died of shrapnel wounds to his stomach, the military said.

Grand National Party Representative Kim Jang-soo, who is a former defense minister, and GNP Representative Won Yoo-chul, who is chairman of the National Assembly’s Defense Committee, paid their respects yesterday morning and followed that up with a visit to wounded marines. Reports indicated that six marines are seriously wounded and nine sustained light injuries.

Kim said of the two marines who died, “They passed away while guarding the country on a solitary island. The government will treat them with exceptional respect.”