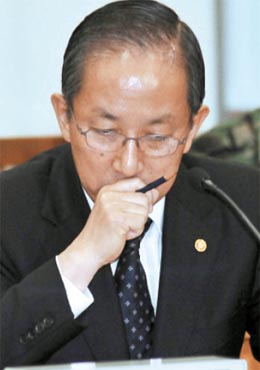 Defense Minister Kim Tae-young studies notes at a hearing on the attack on Yeonpyeong Island at the National Assembly’s Defense Committee. [NEWSIS]

Anger from conservatives - even the ruling Grand National Party - over the administration’s soft reaction to North Korea’s deadly shelling of Yeonpyeong Island boiled over yesterday.

The military also came under heavy criticism for failing to react more strongly. Lawmakers grilled Minister of National Defense Kim Tae-young about the armed forces’ initial counterattack on the North, saying the military should have responded more ruthlessly, including conducting an air strike on the guns used in the attack.

Tuesday’s artillery barrage on the island near the western inter-Korean border was the first North Korean attack on South Korean soil since the Armistice Agreement ended the Korean War in 1953. It was also the second deadly attack on the South in less than eight months. The North torpedoed the warship Cheonan in March, which Pyongyang denies.

President Lee Myung-bak had roller-coaster reactions to the attack throughout the day on Tuesday as Blue House officials repeatedly changed the tone of what Lee said.

Shortly after Tuesday’s attack, Lee was quoted by the presidential office during an emergency meeting that the government must “do everything to prevent the situation from escalating into a full-blown war.”

Blue House senior presidential secretary for public affairs, Hong Sang-pyo, retracted that remark a few hours later and flatly rejected that Lee had ordered the military to refrain from taking any actions that could escalate the situation. The denial was reiterated by the presidential chief of staff, Yim Tae-hee, at a National Assembly hearing yesterday.

Later Tuesday night, Lee visited the Joint Chiefs of Staff, and Blue House officials quoted the president ordering “powerful retaliation if the North stages additional provocations,” including a strike on a missile base if necessary.

“The retaliation must be so powerful that the North would never provoke again,” Lee was quoted as saying.

Conservatives were upset about the president’s initial response. Even the ruling Grand Nationals raised their voices at a meeting of lawmakers to criticize the Blue House’s tepid handling of the situation.

“Let me say a word about those bastards at the Blue House who advised the president to say the situation should be managed to avoid a full-blown war,” Hong said. “They must all be fired for advising the president to have such a weak response.”

Said GNP Representative Song Kwang-ho: “What did our military do for an hour after the North’s attack? The game is all over and what stern countermeasures are we talking about?

“We must use all our firepower to devastate the North if a single round of shell lands here,” Song added.

GNP lawmakers shouted their agreement. Criticizing the military leadership for doing nothing while waiting for orders from above, Song said Lee should fire the defense minister and top military officials, including the chairman of the Joint Chiefs of Staff. The conservative opposition Liberty Forward Party was the first to condemn the Blue House on Tuesday.

“The [president’s] order to avoid a full-blown war could have put a break on the military employing swift and overpowering countermeasures, so that’s just wrong,” said Lee Hoi-chang, head of the LFP.

At the National Assembly, lawmakers grilled Defense Minister Kim as to whether the military’s immediate countermeasure was swift and powerful enough to counter the North’s attack. The North fired 170 rounds of artillery while the South fired back 80 rounds. According to the military, the North concentrated its shelling for 21 minutes starting at 2:34 p.m. and then paused until it launched a second barrage at 3:10. The second attack continued for 31 minutes. It took 13 minutes for the South to fire back at the North after the initial attack.

“If you had used our Air Force capability from the beginning and completely destroyed the North’s guns, there would have been no second attack,” said GNP Representative Chung Mi-kyung to the defense minister.

She also criticized the military for only firing 80 rounds in return.

Said Kim in reply: “If we had used our Air Force capability, the North probably would have been unable to stage the second attack. But that could have led to a full-blown war.”

He also said 90 of the 170 rounds that the North fired went into the sea.

GNP lawmaker Kim Jang-soo, who served as a defense minister in the Roh Moo-hyun administration, urged the military to act more aggressively.

“The military’s countermeasure to the second attack was disappointing,” he said. “It is understandable to counter the first shelling with the K-9 artillery system, but we should have countered the second attack with a ruthless surgical air strike.

“If there is another provocation, you should hit them hard, even if it will cost your minister’s post,” Kim said.