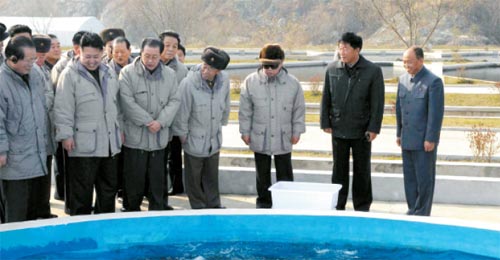 “Firing artillery across the Northern Limit Line at sea is difficult without a direct order from Pyongyang’s highest authorities; firing inland would have been impossible without the will of Kim Jong-il,” the source told the JoongAng Ilbo.

The source added that the North Korean leader visited the coastal artillery base in Gaemori from where the shells were fired with his youngest son and successor, Kim Jong-un, a day before Tuesday’s attack.

“This is circumstantial evidence that the attack was meticulously planned [by North Korea] beforehand,” said the source.

North Korea released a statement Tuesday evening - just minutes after the South Korean government and military stated their official stance on the situation - that they would “continue their attacks” if their territory was invaded. It did not mention Kim and his son’s alleged visit.

Yongyon faces South Korea’s Baengnyeong Island, which is just 17 kilometers (10.6 miles) away from the closest North Korean shoreline, and is just a few kilometers away from the North Korean coastal military base where the fired artillery came from. Kim Jong-il is thought to have visited the base after the fish farm. KCNA reported that Kim Jong-un was also on the trip to the fish farm.

If the visit to the base is true, the chain of command for the attack is thought to be from Kim Jong-il and his son or the two men who are second in command: Ri Yong-ho and Kim Kyok-sik. Vice Marshal Ri is the chief of the Korean People’s Army General Staff and vice chairman of the Central Military Commission of the Workers’ Party. Ri shares the second position with Kim Jong-un. Kim Kyok-sik commands North Korea’s frontline army corps, which is based in the west of the country.

The military bases where the North Korean artillery were fired have roughly 1,000 cannons and howitzers inside caves dug into cliffs along a stretch of North Korea’s western coastline. The guns have firing ranges of 12 and 27 kilometers.

Some foreign media on Tuesday linked the North’s artillery attack to the possible death of Kim Jong-il, but South Korean Defense Minister Kim Tae-young said during a question session at the National Assembly yesterday that he did not believe this was true.