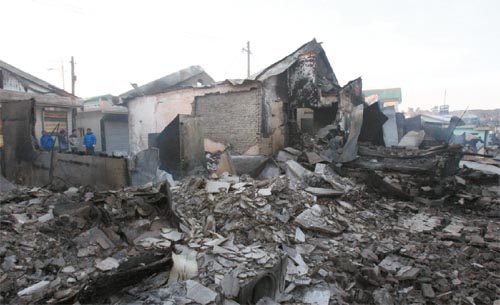 A house on Yeonpyeong Island reduced to rubble by North Korean shells fired Tuesday afternoon. The island was opened to media and outsiders yesterday morning. [NEWSIS]


Condemning North Korea for staging a “premeditated provocation,” leaders of South Korea and the United States vowed yesterday to strengthen efforts to punish Pyongyang, scheduling an armed show of might with a nuclear-powered aircraft carrier and pressuring China to rein in Pyongyang.

President Lee Myung-bak and U.S. President Barack Obama spoke on the phone yesterday to discuss a joint response to the North’s Tuesday shelling of Yeonpyeong Island near the western inter-Korean maritime border.

The attack - the first artillery strike by North Korea on South Korean soil since the end of the Korean War - killed two marines, whose deaths were reported Tuesday. Yesterday, two civilians were found dead in a building destroyed in the attack.

“The [two presidents] agreed that the indiscriminate attack on Korean soil and civilians was a premeditated provocation,” said Kim Hee-jung, Blue House spokeswoman, describing the Lee-Obama telephone call. “They also agreed to strengthen sanctions on the North to counter the increasing provocations.”

Obama explained Washington’s plan to deploy a nuclear-powered aircraft carrier, the U.S.S. George Washington, to the Yellow Sea to participate in a South Korea-U.S. joint military exercise scheduled to begin Sunday, according to Kim. “He also offered to stage more joint military drills in the future if necessary,” she said.

“The two presidents agreed to hold combined military exercises and enhanced training in the days ahead to continue the close security cooperation between our two countries, and to underscore the strength of our alliance and commitment to peace and security in the region,” the White House also said in a statement.

According to U.S. Forces Korea, the U.S.S. George Washington Carrier Strike Group will join South Korean naval forces in the waters west of the peninsula from Nov. 28 to Dec. 1. Washington informed China about the drill schedule yesterday, and the U.S.-Korea Combined Forces Command will inform Pyongyang, U.S. Forces Korea said.

Military chiefs from both countries also agreed to coordinate a countermeasure to the shelling by North Korea, said the Ministry of National Defense. In a telephone call around Tuesday midnight, Defense Minister Kim Tae-young and U.S. Defense Secretary Robert Gates agreed to joint actions, including the possible launch of a joint crisis management task force.

The two defense chiefs also agreed to do everything possible to prevent additional provocations from North Korea, including sharing intelligence sources.

The Defense Ministry said the two countries raised their joint surveillance level toward North Korea from Watchcon-3 to Watchcon-2, the second-highest on a five-grade surveillance system.

Watchcon-2, which is raised in response to “a provocative threat from the North,” stipulates strengthened surveillance and analysis of North Korea. Usually it leads to increased operation of U-2 spy planes and RF-4 reconnaissance jets near inter-Korean border areas.

The two countries operated under Watchcon-2 briefly after the sinking of the South Korean warship Cheonan in March but soon lowered it to Watchcon-3. Before that, Watchcon-2 was raised only a handful of times, including after the 1999 Yeonpyeong naval skirmish, the North’s first nuclear test on Oct. 15, 2006, and its second nuclear test on May 28, 2009. Usually, Seoul and Washington maintain Watchcon-4. Watchcon-1 has never been raised.

The bilateral measures from Seoul and Washington come as many Seoul officials remain pessimistic about the effectiveness of dealing with the North through the United Nations Security Council, as they believe was proven low after the Cheonan sinking.

Tuesday night, Minister of Foreign Affairs and Trade Kim Sung-hwan asked for cooperation from Japanese, Chinese and Russian ambassadors after calling them to the ministry, a ministry official said.

The Foreign Ministry is taking a cautious approach toward referring the North’s shelling to the UN Security Council. “We need to do a cost-benefit analysis before making any decision [on a UN referral],” said the official.

After the sinking of the Cheonan, which killed 46 South Korean soldiers, Seoul and Washington faced reluctance from China and Russia, two permanent members of the Security Council, to blame North Korea for the sinking, which the North has steadfastly denied. The July Security Council resolution was watered down by Chinese and Russian objections.

Obama told Lee in yesterday’s telephone conversation that China should cooperate with the two countries. “I will call China to say that it must cooperate with us about North Korea issues,” Blue House spokeswoman Kim quoted Obama as saying to Lee.

“North Korea recently revealed a highly enriched uranium program and admitted to the provocation [the Yeonpyeong shelling], so I believe China will cooperate this time,” Lee was quoted as saying by Kim. The North disclosed a uranium enrichment facility at its Yongbyon nuclear center to U.S. scholars on Nov. 12, raising suspicions it was exploring alternative ways of developing nuclear weapons beyond its existing plutonium-based weapons.

As a punitive measure, Seoul yesterday said it was suspending all aid to the North. The Ministry of Unification also said it has suspended visits by South Koreans to the Kaesong Industrial Complex because of safety concerns. As of yesterday, around 700 South Koreans remained at Kaesong.

UN Secretary General Ban Ki-moon called for restraint after the surprise attack, which he called “one of the gravest incidents since the end of the Korean War.”

Japanese Prime Minister Naoto Kan told reporters that it was an unacceptable atrocity and strongly blamed the North.