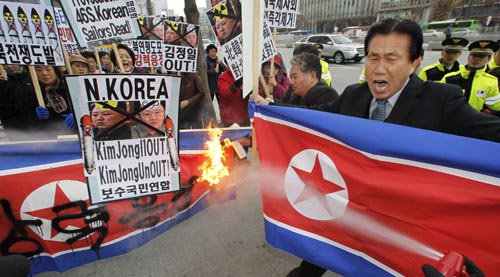 Gweon Gyeong-jin, a 31-year-old housewife from Asan, Gyeonggi, said she doesn’t want unification of the two Koreas after the bloody conflagration. “Before the bombardment, I wanted reunification to boost our nation’s power and also felt sorry for the starving people across the border,” she said. “But now I think unification is not a priority for us anymore. Protecting ourselves and tightening national security are our top priorities.”

Busan-based housewife Kim Hwa-sun, 62, said, “North Korea’s attack can’t be accepted because it aimed at people from the same nation.”

Kim Heung-kuk, a 50-year-old singer who did military service as a marine, said he feels pain for the killed soldiers. “When I saw the island was bombarded, I felt pain as if I were on it,” Kim said.

About 30 conservative civic groups held a press conference yesterday to excoriate North Korea for the attack.

“The international community has been keeping an eye on North Korea because of its attack on our Navy warship Cheonan, the succession scenario and the recent disclosure of its uranium enrichment. We can’t hide our worries about such a serious military provocation, which caused a collision between the two Koreas,” said the Korea Freedom Federation.

After the press conference, the groups had a street rally in central Seoul, criticizing North Korea.

Citizens who watched the attacks live on television blamed not only North Korea but South Korea’s unsatisfactory defense.

Hwang Jae-seong, a 19-year-old living in Seoul and waiting to go into the military for compulsory service, said, “The young soldiers have been dying [since the sinking of the Cheonan in March], but I feel the government is just backing off from North Korea’s provocation.”

“How can an incident [like the Cheonan’s sinking] happen again?” asked Lee In-ok, father of a sailor who died in the March Cheonan attack. “I think this attack was caused by the government’s wrong response to the North. The government should have received an apology from North Korea for the Cheonan incident.”

Hwang Eun-tae, 62-year-old father of a soldier who died in a sea battle near Yeonpyeong in 2002 that killed six military men, said, “I think the military has failed in its security and strategy, and what we get is more bereaved families who lost their sons.”

Bang Yeong-min, whose wife was shot by a North Korean sniper while visiting the Mount Kumgang resort on July 11, 2008, said, “Nothing has changed since my wife died. The government should have taken firm measures against the North when she was murdered.”