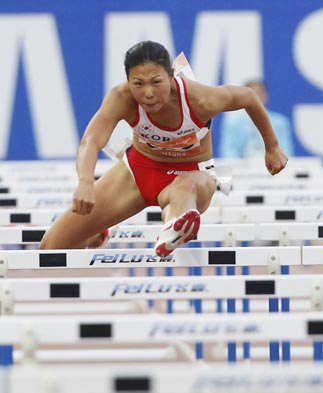 Lee Yeon-kyung competes in the women’s 100-meter hurdles at the Asian Games yesterday. Lee went on to win gold. [YONHAP]

Lee finished in 13.23 seconds at Aoti Main Stadium, nudging Kazakhstan’s Natalya Ivoninskaya by one hundredth of a second.

The bronze went to Sun Yawei of China who clocked in at 13.27 seconds.

Pictures of him crossing the line Wednesday evening in 13.09 seconds were plastered over all major dailies and Web sites, while television stations replayed the event over and over.

“Former Olympic and world champion Liu Xiang remains the single most important attraction, not just on the Asian Games track, but for Chinese athletics,” an official Xinhua News Agency said.

The victory by China’s first Olympic track gold medalist finally put to bed the shock waves caused by his calamitous outing at the 2008 Beijing Olympics.

At the time, he had limped out of his qualifying heat with an ankle injury.

That nagging problem, subsequent surgery and rehabilitation came under much scrutiny in China before the multimillionaire put things right at the Aoti Main Stadium.