A new role for Macbeth - behind bars

A new role for Macbeth - behind bars 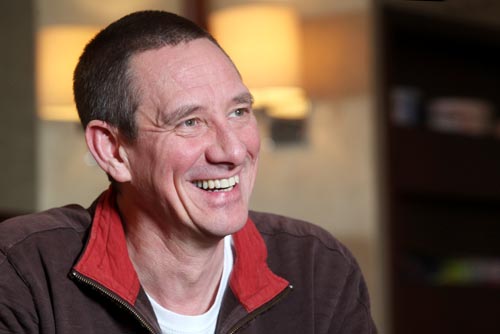 British filmmaker Tom Magill visited Seoul last week to speak about art education for prisoners. Magill, once a prisoner himself, makes films with prisoners. He believes that film has the power to transform the lives of people who are marginalized. By Jeon Min-kyu


Shakespeare and prisoners seem like an unlikely combination, unless the prisoners are characters in one of the Bard’s plays. But British filmmaker Tom Magill has brought the two together in a movie called “Mickey B,” a modern version of Macbeth that was filmed entirely in Maghaberry Prison, a maximum-security facility in Belfast, Northern Ireland.

The project started about five years ago when the 54-year-old Magill, who spent three years in prison from age 19, was asked to come up with a creative project for the most difficult prisoners at Maghaberry.

Magill knew from experience that the prisoners needed to express their guilt in a safe way that would eventually help them to lead new lives outside of prison, and he came up with the idea of making a film. The film’s cast, crew and production team are all inmates at the prison.

“What many people don’t realize is the strength of peer pressure within the group [in prison],” Magill said in a recent interview in Seoul with the Korea JoongAng Daily.

He was invited to Korea by the Ministry of Justice to give lectures and workshops to relevant Korean officials on creating educational programs for prisoners.

“I know prisoners feel guilt about the crimes they’ve committed but they have few opportunities to express that guilt. Any show of guilt could be considered a weakness,” he said. “People just say ‘Lock them up and throw away the key.’ But that’s not the answer. We need to help them to exorcise their guilt.”

Magill, who majored in drama in college, is currently the artistic director of the Educational Shakespeare Company, and he’s been using film to create cultural and educational programs to empower prisoners, ex-prisoners, their victims and anyone on the margins of society.

Mickey B (2007) was ESC’s third project following a short film and a documentary.

Magill described the moment when he understood the transformative power of film.

The video was later screened for the youth group, and Magill said he witnessed how the film changed the groups’ perceptions of themselves and one another.

“The youth kept watching it,” he said. “They got such a buzz from watching themselves [on] film. It adds a completely different dimension because people can see themselves and they can begin to understand how they are and make changes.”

Magill described film as a “tool for self-improvement and development.” But he found that it wasn’t easy to win the prisoners over with Shakespeare.

“It was Shakespeare,” he said with a laugh. “They’re from the working class. They think Shakespeare is snobby, not for them, something beyond them.”

So Magill approached Sam McClean, who plays Duncan, the king of Scotland, about appearing in the film. He thought that McClean had the right look and demeanor for the role. At the time, McClean was serving a 20-year sentence for robbery.

After McClean agreed to participate, he introduced Magill to David Conway, who plays the leading role of Mickey B (Macbeth).

“David was very well regarded in the prison by the rest of the men, but he was distrustful and suspicious of us,” Magill said.

It took time for them to build trust, but Magill said that once Conway was on board it was easy to recruit the other guys.

Magill was allowed to meet with the prisoners for just five hours a week to rehearse. But he soon realized that time was not the only obstacle he would have to overcome.

“The most challenging part was to get people to believe in themselves, especially people with low self-esteem and self-confidence who have been told they are useless, worthless and maggots,” he said.

The other major problem was illiteracy.

“Illiteracy is a huge problem in the U.K. and Ireland. About 65 percent of the men [in prison] have a reading age of below 11,” Magill said. “We had to find a way to tell the story of Macbeth.”

Magill said he thought about putting the play on a storyboard to show to his cast, but decided that would take too long, so he staged each scene, took photographs of the setup and showed the pictures to the prisoners.

“It took us about two years from the beginning to the end,” he said.

To their surprise, the response to Mickey B was extremely positive. The 60-minute film is showing in Tel Aviv this week. It will be screened by the Shakespeare Association of America in Chicago in April, and in Quebec and Florida next year.

One of the reasons for the film’s success is that the quality of acting is high. Watching the film, it’s hard to believe that the inmates have never acted before.

“My view on acting is doing,” Magill said. “For me, acting is not about being false. What I believe as a director is if you get the right cast, then it is easy for them.

“All I was doing was asking them to draw upon their experience of crime, murder, betrayal, ambition, violence and guilt. Things that they already knew.”

Magill’s next project will be based on Shakespeare’s “The Tempest,” and this time he will be working with ex-prisoners.

During the interview, Magill was not shy about expressing his appreciation of Korea’s cultural and educational programs for prisoners. “I think Korea is fast becoming the world leader in arts and cultural education [for prisoners],” he said. “I’ve seen [several] cases and it’s really impressive. I’ll be taking examples of your country back to the U.K.”

Before wrapping up the interview, Magill also talked about his belief in arts education.

“I would love for us to have a body of actors who are ex-prisoners and victims to be able to make films that can show us the power and value of art education to transform people’s lives. That would be my vision,” he said.