A web of marketing awaits the Spider-Man musical

A web of marketing awaits the Spider-Man musical 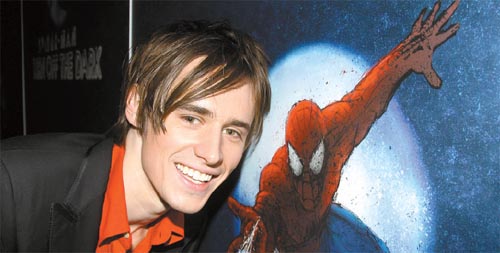 Reeve Carney, who portrays Peter Parker, poses at the “Spider-Man: Turn Off the Dark” photo call on ABC’s “Good Morning America” at The Hudson Theatre in New York. [AP]


NEW YORK - Robin Buckwalter is fully aware that a Broadway musical about Spider-Man will be opening soon. So far, though, he hasn’t felt a buzz of anticipation about it where he works.

That may be bad news to producers: Buckwalter works at a comic book store. “I haven’t heard any feedback from any of the customers that come into the store,” says Buckwalter, the 28-year-old co-manager of Galaxy Comics in the Brooklyn neighborhood of Park Slope.

So comic book lovers won’t be lining up when the mega-musical “Spider-Man: Turn Off the Dark” opens its doors Sunday? “No,” he says, laughing. “I really doubt it.”

Such a lukewarm reaction from one segment of comic fans may seem to put backers of the web-slinger’s expensive show in a bind, but they are not necessarily relying on that particular demographic to fill the Foxwoods Theatre on 42nd Street.

There are plenty of other potential targets: traditional Broadway audiences who want to see spectacle, admirers of its Tony Award-director Julie Taymor and fans of U2’s Bono and The Edge, who wrote the music.

“It’s a marketing person’s dream to work on a show like this because there really are so many ways to reach your various target audiences,” says Amanda Pekoe, president of The Pekoe Group, a marketing company not linked to the Spider-Man musical.

“No matter what show you’re working on - Broadway or off-Broadway - your first goal is to reach out to the people who are typical theater ticket-buyers,” she says. “No matter how different or unique or eccentric a show is, that’s always the first goal.”

While the show has no bankable stars, the music may be a big draw. Only one tune - “A Boy Falls From the Sky” - is widely known, but Bono and The Edge say there’s something for everyone in the score.

“We saw this as a way to shake things up a bit. The problem with rock ‘n’ roll is it’s a little bit of a ghetto. It tends to atrophy over time if new things don’t come into it,” says The Edge, the band’s lead guitarist.