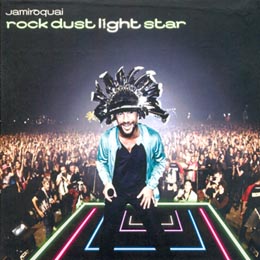 Disappointment tends to follow high expectations. Jamiroquai defies this rule with its new album, “Rock Dust Light Star,” which is the group’s eighth album and its first in four years. That’s a long time between albums, but the new album shows they’ve been working hard.

The group has always been known for their varied sound and upbeat songs, and this latest album is their first venture since their contract with Sony ended in 2006. That’s proving to be a plus factor for them, as it has allowed them to really test their limits. The album is in sync with the band’s original groovy sound and is reminiscent of the good old days of soul - which is especially true of the song “Angeline.” On “All Good in the Hood” and “White Knuckle Ride” it is the electronica and disco sound that comes through.

Although Jamiroquai drummer Derrick McKenzie revealed in an interview with playvybz.com before the album was released that the soon-to-be released record would have less disco, it seems they decided to keep a little bit of the disco beat, proving that they can bring the ’70s back and do it in style.

The album also does a job of transcending genres. There’s a little bit of blues and Motown, and the album strikes a good balance between upbeat dance music and an easy listening sound.