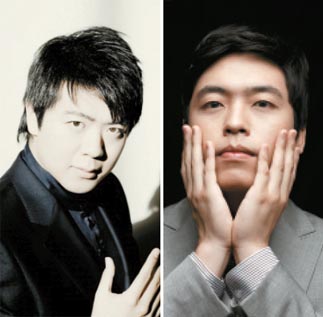 Two acclaimed pianists - Kim Sun-wook and Lang Lang - are set to have recitals in Korea this Saturday and next.

Kim’s performance is part of his tour of Korea. It will be the last chance to see him perform until the end of next year, given that the 22-year-old prodigy has announced he will tour overseas in 2011, according to Vincero, his concert agency.

Currently registered with the conducting class at the Royal Academy in London, Kim will perform Beethoven’s Piano Sonata No. 30; Piano Sonata No. 14, “Moonlight”; and Schumann’s “Arabesque” and “Kreisleriana.”

Best recognized for having been locally trained, Kim became the first Asian pianist to win the top prize in the prestigious Leeds Competition in 2006.

He was also the youngest musician to achieve the feat since Michael Roll, who won the inaugural edition of the international competition at 17.

In 2012, Kim will return to Korea for eight recitals during which he will play the entire collection of Beethoven sonatas at LG Arts Center.

Meanwhile, China’s superstar pianist Lang Lang is returning for a concert exactly two years after his previous performance. It will be his fifth visit to Korea, and all four of his previous concerts sold out.

Like Kim, the 28-year-old Lang Lang will perform two Beethoven sonatas - Sonata No. 3 in C Major and Sonata No. 23 in F Minor - at his recital. The program also includes Spanish composer Isaac Albeniz’s “Iberia” Book 1 and Prokofiev’s Piano Sonata No. 7 in B Flat.

The spiky-haired pianist played at the opening ceremony of the 2008 Beijing Olympics. He also plays one of four principle roles in “Projekt Chopin,” an animated film focusing on the music of Frederic Chopin in celebration of the Polish composer’s 200th birthday.

The film is set for release late this year in New York and Beijing, according to local concert agency Mast Media.

*Both concerts are at the Seoul Arts Center’s Concert Hall.