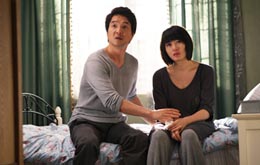 Han Suk-kyu, the charismatic South Korean spy in 1999’s “Shiri,” and Kim Hye-soo, the seductress in 2006’s “Tazza,” team up as an odd landlord-tenant couple.

Yeon-joo (Kim) is a single mother who lives in a two-story townhouse with her middle school aged daughter.

To pay the bills, she decides to rent out the second floor of the house.

Her tenant is Chang-in (Han), who claims to be a writer. Although he seems like an ordinary guy, Chang-in seems to have come to the house with a purpose, and sneaks around when he can.

That would seem like cause for eviction for most, but Yeon-joo isn’t like most landlords and is suffering a bout of depression. Meanwhile, her daughter is going through a normal teenage obsession with her looks, so she doesn’t notice his odd behavior either.

But even though neither one of them is actively trying to put a stop to Chang-in’s behavior, their respective problems serve to thwart his plans.

What does Chang-in want from Yun-ju’s house? Who is he? The mystery unfolds with comical scenes between Yun-ju and Chang-in. 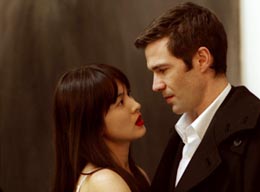 Hallyu (Korean wave) star Song Hye-kyo made her Hollywood debut as a femme fatale in this film from 2008. She started attracting attention with her role as the heroine Jung-suh in the 2000 hit television drama “Autumn Story.”

Jung-suh was the sweet and fragile girl next door who cared for others more than for herself, which gave Song the same image.

In Fetish, however, she is almost unrecognizable in red lipstick, 6-inch heels and lacy tops.

In the upper class suburbs of New Jersey, Korean-American Peter (Rob Yang) is starting a new life with his mysterious bride, Sookhy (Song), who he met through a marriage broker in Korea. She chose to leave Korea to avoid receiving the power of shamanism that seems to run in her family. But her fate doesn’t seem to allow her to escape.

The film portrays church-based Korean communities in the states, where traditional Korean values have little currency.

It also examines the conflicts that can arise when people from different cultures come together.

Peter Highman (Robert Downey, Jr.) is just trying to get to Los Angeles for his child’s birth, but after a series of unfortunate events at the airport - he gets shot by an air marshal and is put on the no-fly list - he is relegated to hitching a ride with quirky pot-smoking Ethan (Zack Galifianakis) to get to his destination.

Ethan and Peter squabble a lot along the way - they actually get into serious fights and arguments with silly dialogue - which provides most of the comedy.

Jamie Foxx plays Peter’s good friend, who comes to Peter’s rescue later in the film when things get too heated between Ethan and Peter.

But the two eventually reconcile their differences at the Mexican border in an exciting and comedic sequence involving drugs, a car and border police.

There’s more fun to be had before and after this scene, which probably makes Due Date the best comedy film of the year.

Colin and Greg Strause, the brothers who directed “Skyline,” have spent most of their career doing special effects for dozens of movies.

Their lack of storytelling chops is evident in their second stab at directing in this alien invasion film.

In the film, aliens in spaceships arrive in Los Angeles, where the extraterrestrials proceed to beam down light and suck up nearly all Angelenos, which many in the audience may consider more of a boon than a tragedy.

A group of survivors are left in a building, and they spend most of their time in the movie running around inside and peering out windows.

While the movie has impressive CGI extraterrestrials, the human actors barely register as C-list celebrities.

The result is a 93-minute film that has lots of aliens and remains alien to the audience, who must endure a nonexistent plot.