The KDB Financial Group, including chairman Min Euoo-sung and its employees, participates in the Building Houses of Hope program in a volunteer effort to build houses for the needy. They also donated 160 million won.


The Korea Development Bank is aggressively pursuing social contribution work in an effort to fulfill its responsibilities to the community while also acting as a safety net for the market. Along these lines, the bank has organized various social contribution programs to support rural areas, cultural endeavors and volunteer efforts as well as families and individuals struggling financially. KDB employees are working hard to ensure that the bank funnels a share of its profits back to the community to help bolster the country as a whole.

The KDB Foundation hosted an event in October at the bank’s headquarters in Yeouido to support fledging entrepreneurs by donating 500 million won to the Social Solidarity Bank. The KDB Foundation was founded in 2007 to manage the bank’s social responsibility efforts, which include helping low-income residents, fostering new talent and aiding immigrants in Korea.

The money given to the Social Solidarity Bank will be used to help individuals on the lower end of the income scale who have the will and the drive to start businesses but lack the financial means to fund a new enterprise.

The Social Solidarity Bank will offer up 20 million won in support per individual in the form of loans without collateral requirements. The KDB has already helped 85 entrepreneurs open their own businesses over the past five years by providing a total of 2.1 billion won in aid. It plans to provide another 200 million won to the Social Solidarity Bank to help educate and train talented micro-credit specialists. 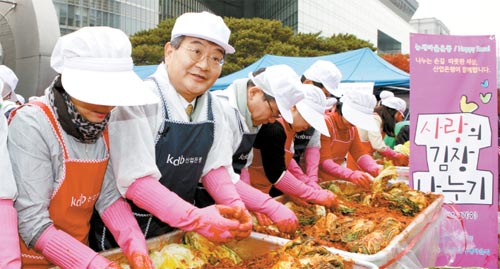 Min Euoo-sung, chairman and CEO of KDB Financial Group, makes kimchi for families and elderly people in need on Nov. 17.


The KDB Foundation also has a job education program dubbed “Stepping Stone of Hope” to help low-income families as well as a scholarship program aimed squarely at students in middle school or high school and those with disabilities. Additionally, it offers the KDB Vision Scholarship for university students, the KDB Overseas Korean Scholarship Program and additional social welfare programs.

One of its main efforts is the KDB Family Volunteer Corps, which began in 1996. This volunteer group is divided into several segments, including volunteer support and emergency disaster recovery teams that help out local organizations and aid individuals with disabilities by helping them adapt to daily life. It has 40 branches that actively conduct volunteer work on a monthly or quarterly basis.

KDB has also started the Building Houses of Hope program to assist families who live in poor conditions or do not have a home. The KDB Financial Group participates in this program every year along with Habitat for Humanity Korea. In October, 70 of its employees - including Min Euoo-sung, the chairman and CEO of KDB Financial Group - participated in a volunteer effort to build houses in the Yangpyeong Habitat and donated 160 million won for house construction.

Another focus of the KDB’s philanthropic efforts involves educating teenagers about the economy via JA-KOREA, which focuses on students in elementary, middle and high schools as well as those at universities. Several dozen volunteers visit schools each year to teach economics-related material.

To help create a strong link between cities and rural regions, the KDB established a sisterhood relationship with Yangji-ri, Dongsong-eup in Cheorwon County, Gangwon Province, in August 2004. When the relationship was first cemented, the KDB focused on helping rice farmers and improving the environment. Now, however, its employees primarily help the town by purchasing products produced from the region and pitching in to help construct a farm village experience hall. Additionally, it offers programs for children to learn about migratory birds in the area and economy and environment in general by linking up with schools in other areas. KDB invites residents from the town to Seoul as well to promote exchange efforts between the capital of Korea and the rural area. To support the hopes and dreams of the nation’s youth, the bank is also inviting kids from remote areas to Seoul each year to participate in a three-night, four-day tour of the area.

During this event, the children visit the KDB, the War Memorial of Korea, Everland theme park and the 63 City. They also get the opportunity to watch a performance of “Jump.”As part of its efforts to help children, the bank is hosting a blood drive from kids with leukemia and cancer. The KDB also works to help those suffering from severe damage from storms and snow.

These volunteer efforts activities help enhance the lives of not only the individuals and families on the receiving end of the equation but also the employees who volunteer their time as well. This is extremely evident in the office, where the satisfaction and pride KDB employees feel in their jobs is on full display. The KDB has received accolades for its various social contribution works, receiving the Office Saemaeul Volunteer Award from the Office Saemaeul Movement in 2005 and the Seoul Mayor Award in the 2009 Seoul Social Welfare Contest. It also received the president’s award in the Saemaeul Leader’s Contest, further enhancing the image of the bank.

While the KDB primarily focuses on supporting local companies survive and thrive both at home and abroad, it also strives to play a major role in the community through its various social contribution efforts.