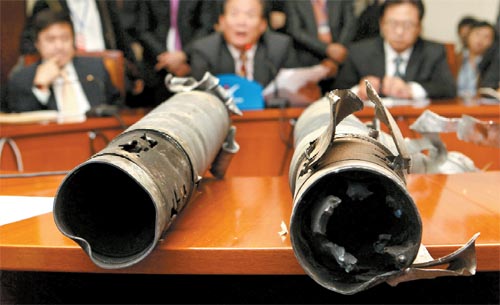 “Minister Kim had officially tendered his resignation on May 1, but the president delayed accepting it because of pending issues including follow-up measures on the Cheonan’s sinking and defense ministerial talks with the United States,” said Lee’s Chief of Staff Yim Tae-hee last night. “But the president decided to accept his resignation because of a series of accidents that happened in the military and to improve the morale of the armed forces.”

Yim said Kim’s successor is expected to be announced today.

Earlier in the day, the government decided to revise the military’s rules of engagement to respond more aggressively to a North Korean attack and also beef up defense capabilities near the western inter-Korean border, the Blue House and the Joint Chiefs of Staff said yesterday.

The government and the military have been under severe criticism for poor readiness and a passive response to the first North Korean attack on South Korean soil since the Armistice Agreement was signed to end the Korean War in 1953.

It was disclosed yesterday that the island’s radar system failed to function properly, making it difficult for South Korean forces to fire back at the origin of North Korea’s attack.

The military also employed only three of six K9 self-propelled 155-millimeter howitzers on the island’s Marine base because the others didn’t work, the Joint Chiefs said yesterday.

Amid growing criticism, the Blue House and the military began work to improve military readiness. “We have decided to completely overhaul the rules of engagement because the existing rules were criticized for being too passive,” said Hong Sang-pyo, senior presidential secretary for public affairs. “The revised rules of engagement will adopt a whole new concept. For example, our response will be different for an attack on civilians than for an attack on the military,” suggesting that attacks on civilians will receive a more severe response.

The government said it would beef up capabilities, including ground forces, on the five islands in the Yellow Sea near the inter-Korean border. “The five Yellow Sea islands are vulnerable areas, and we must step up our readiness by deploying the best arms to counter local battles and asymmetrical attacks,” President Lee was quoted as saying. “We have decided to first spend the budget earmarked for preparations against asymmetrical threats from the North,” Hong said. “We will also scrap the 2006 plan to cut the number of marines on the five islands.”

Following the Blue House meeting, the Joint Chiefs of Staff said yesterday that the military will develop more aggressive rules of engagement.

“The rules are not simple, so we will carefully revise them,” an official said yesterday. “We will consult with the United Nations Command to change the rules.”

The current rules of engagement were established by the UN Command in 1953, and are designed to contain an armed clash and prevent it from escalating into a broader war.