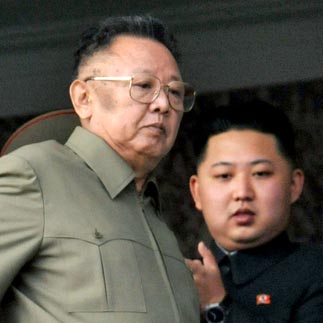 While many wonder about the real motive of North Korea’s shelling of Yeonpyeong Island, which few doubt will bring more isolation to the impoverished country, some observers at home and abroad say that it is likely related to the ongoing power succession in the North.

“This is also tied, we think, to the succession of this young [man] who’s going to take over at some point in the future,” Adm. Mike Mullen, chairman of the U.S. Joint Chiefs of Staff, told ABC’s “The View” on Wednesday.

A JoongAng Ilbo report on Thursday about Kim Jong-il and Kim Jong-un’s visit to the site where artillery shells were fired upon Yeonpyeong Island, backed such an analysis.

Some observers in Korea also said the attack is meant to build a power base for the junior Kim by creating tensions that they said will shift internal conflict over the frail economic situation in the North to unity based on hostility against Seoul, Washington and other allies.

“It is a provocation to firmly establish, in the minds of the group in power, the image of a military leader and draw their allegiance by creating tension,” said a Seoul official.

The North’s succession scenario received wide media attention around the world in September when Kim Jong-un was promoted to general and vice chairman of the Central Military Commission of the ruling Workers’ Party.

The country’s military-first ideology, which Kim Il Sung and Kim Jong-il used to bolster legitimacy for their leadership, has been stressed recently.

Analysts say the North launched provocative measures during the succession process for Kim Jong-il and could attempt more provocation to cement succession for Jong-un.

“Because [the North] has a weaker base for the succession for Kim Jong-un than the base for Kim Jong-il, more reckless provocation from the North is possible,” the Seoul official said.